Below are the two pieces that tied for second last month. Both are entirely different approaches to the passions that surround the military life and war; both are about Marines - one female, one male. Robert and Steven are both active in the writing life and belong to several writing groups in South Alabama. Steven is currently the President of Baldwin Writers Group and a talented illustrator as well as budding writer. Robert loves boats, books, and photography.

Thinking of the past, experiencing the present, will I survive until the future? I’m not hopeful.

Drill Sergeant’s a sadist. We’ve been drilling, in this inferno, two hours. Parade ground’s super-heated by the relentless sun. They’ll black-flag drill, when it gets to ninety-five. Boots stickin’ to asphalt.

Four years undergraduate, two years graduate school, fluently speak Pashto, I thought I’d change the world. What was I thinking? I joined the Marines. They need female interpreters in Afghanistan.

Where do they find people like her? The mutant scrap heap? 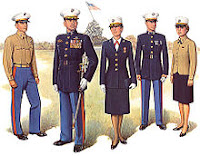 Will I live to see graduation next month? Summer starts tomorrow. Hur—rah, the end of Spring.

"Can we keep him?" An eleven year-old Jonathan begs.

Sixteen year-old Jonathan stands with a freckled young redhead under his arm. "Mom, this is Susan, from science class."

Managing past the scene, Martha reclaims her seat. To her side, on the end table, waits the computer-generated letter atop the torn envelope. Mom, I've decided to be a Marine, like Dad was.

Catching the letter's corner, her hand hesitates then fights to lift the heavy paper. "We regret to inform—"

Resting the letter in her lap, Martha sets her watch. Spring forward, Fall back. 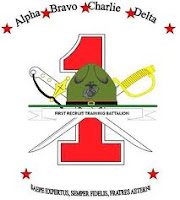 My father was a Marine in WWII and my mother was a WAVE. I salute all the brave women and men in uniform. Mahala

Posted by Mahala Church at 4:12 PM