Congratulations to Candice Marley Conner the February Stuff and Nonsense winner! Conner, a graduate from the University of South Alabama with honors in English and a concentration in Creative Writing has published articles in The Wiregrass Living Magazine, Good Taste Magazine, and Tanning Trends Magazine. Conner would love to scream "off with their heads!" especially in the Wal-Mart parking lot but has thus far refrained from hitting anyone with her car (think Fried Green Tomatoes). She is a work from home mom who caters to the needs of Marley, her two year old, and is busy baking a new bun in the oven. And if that isn't enough to keep her busy, she is getting ready to query her first YA novel.        mahala

The Unheard of Liza Hush


Most people fell down the rabbit hole with Alice; Liza Hush identified more with the Queen of Hearts. The Queen was forever shouting, “Off with their heads!” in response to slights she suffered, but then her husband came along and pardoned everyone behind her back. It wasn’t like Liza thought everyone needed beheading, or even where exactly she stood on the idea of corporal punishment. Instead, she felt that behind the Queen’s querulous command was, at heart, a person who just wanted to be heard. Liza thought perhaps circumstances had pushed her to be so demanding.


The Queen had her card guards who jumped to do her bidding—or pretended to— but Liza knew that as soon as they finished painting those roses or herding up all the croquet ball hedgehogs, they were laughing at the Queen behind her back. If a Queen couldn’t command respect, how could Liza expect to?


Liza felt pressure on her back and turned slightly to look. It was a purse, carelessly slung over a woman’s shoulder; one of those black leathered, multi-zippered monstrosities that made you wonder if the wearer was into bondage. But then, everyone had a purse like that, even the little cloud-haired lady whose daughter picked her up from the assisted living facility to buy flowers from the shop where Liza worked. Surely, that didn’t mean… no, ugh… just …No.


Another nudge, this time harder, made Liza jump, almost losing her balance. The owner of the bondage purse remained clueless as she shifted in her cheetah heels, speaking animatedly to a similarly clad woman next to her.


Should she just ignore it? If she pushed back to regain her place in line, she would be the rude one. What if the bondage woman pushed back or yelled at her and caused a scene? Liza’s cheeks flushed at the image. She spread her legs wider and dropped her stance ever so slightly.


Liza reached the head of the line and stepped forward, a sign of relief escaping from between her thin, pale lips that she no longer had to contemplate battle. Unfortunately, Bondage Purse Woman and her friend also pranced forward, effectively pushing Liza completely out of line.


“Off with their heads!” Liza screamed, or rather, whispered, unheard. Then she thought about her car and that no matter how insignificant one might perceive her as, it’s really hard to ignore a car. Liza smirked wickedly at the image of Bondage Purse Woman stiff as a light-locked deer in her headlights. Liza would be noticed then.


She left her place, or really her un-place, in line and walked out to her car. She drove around the building and licked her dry lips in anticipation as she was finally asked to place her order. 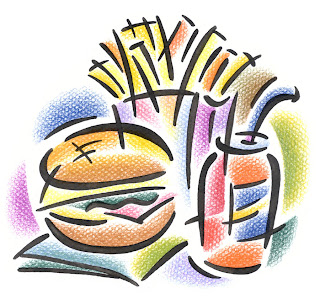 Posted by Mahala Church at 2:22 PM