Writers Guild and tightening up my saggy middle

cj Sez: Authors’ showcase events are notorious for resulting in few book sales for the authors who participate. The big reason I like to attend is to get my name recognition out to local readers. Home for the Holidays, co-hosted by the Mobile Writers Guild and the West Regional Branch of the Mobile Public Library, took place on Nov 22 and attracted a meeting room full of debut and established writers with decorated tables displaying their books for sale. I really did have a good time interacting with other writers and happily sold (surprise) three books: one Choosing Carter, one Deadly Star, and one of the Christmas through a Child’s Eyes anthology.


When I look at what books sold, I realize they are all published by an imprint of F+W Media … in 2015, 2013, and 2008. I’m not sure how that happened. It was certainly not intentional on my part. I didn’t submit to F+W media. Those manuscripts were submitted either to Crimson Romance or to Adams Media. It seems I have a “voice” (i.e., write in a style) that fits their editors’ interests. That, I think, is one of the keys to writing: Finding your voice, your personal style.

My first interest was in screenwriting. In 2001, I flew from Detroit to San Francisco to take a three-day seminar from Robert McKay, who conducted seminars on screenwriting. 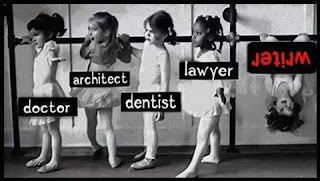 The experience was invaluable because I learned to visualize my story and how to write in terms of the characters’ action-dialogue-and scenes that show the story. How characters react and what they don’t say can speak volumes.

I’ve talked with writers who visualize some movie star or other playing a character in their books. Is that something you do?  I can’t do that. I don’t see a specific person, I visualize the whole characterization—I’ll leave it to Stephen Spielberg or Francis Ford Coppola (ha ha) to find the best mega-star for the role.

Most us, and I am very much included in that generalization, have a wonderful idea on a theme. A lot of writers (me included) also know how we want the story to end, so that’s all set. It’s the middle that gets us. It wants to sag. Like an old married couple, sometimes the excitement fades away. Unless we work at it.

Working at it probably means changing some things around. For me, changes in the middle almost always mean rewriting the first chapter partially or entirely more than a few times.

To help me out in this process, I read the dialogue aloud as I go along. Does it sound natural? Are the sentences too complete and so full of blah-blah information that they slow the pace of the story?  This can happen anywhere, but it very often happens in the middle part of a story when I’m trying to get the word count I want/need. Sometimes, I change a character’s name, a story thread, a sentence structure, or, as was true for Deadly Star, the whole genre (which went from an action/adventure to a romantic suspense). I also might give the protagonist another challenge or two (read that, conflict) in order to bring back/ramp up the thrill.

What do you do to shore up the saggy middle of your story? And if you don’t ever have one, don’t tell me. I’d feel so inept.

PS:  Pray for peace; pray that our leaders.
PPS: I think that picture of me at the library is one of my better shots. %>)