Fourth of July is more than fireworks

Amidst all the partying going on, it’s sad to read that a lot of Americans don't know why we celebrate Independence Day, what country we declared independence from, what year the Declaration of Independence was signed, and other basic knowledge that every U.S. citizen should know.

Have they forgotten? Were they never taught? When did it become politically incorrect to be proud to be an American, to celebrate our Independence Day? Isn’t that why the United States is inundated with refugees—people desperately seeking the freedoms that Americans have fought and died to create and preserve?

In his twenties, my father studied hard to become a citizen. How many native-born, young Americans could reel off the answers necessary to pass the naturalization test? If I am to believe what I see on TV, embarrassingly few. 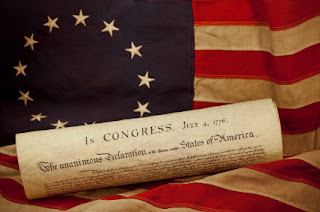 The Continental Congress approved the final wording of the Declaration of Independence (from Great Britain and its king) on July 4, 1776. They'd been working on it for a couple of days after the draft was submitted on July 2nd and finally agreed on all of the edits and changes.”*

(I’m in awe of the sacrifices people made to reach that point; the proud-to-be-an-American in me loves the history of why we celebrate the Fourth of July; and the writer in me loves that last line.)

Independence Day this year marks the nation's 240th birthday. Why not take a few moments to remember and share with your children why we are celebrating?

Okay, you-all guys keep on keeping on, and I’ll try to do the same. I wish you a safe and happy Fourth of July celebration.

PS:  Please stop by on Wednesday for a guest post by young adult author Carrie Dalby, who blogs about how music helps set the mood for her writing.