cj Sez: I spent all yesterday at the Ben May … the main branch of the Mobile Public Library system … at the inaugural Mobile Literary Festival. A free event co-sponsored by the Library and the Mobile Writers Guild for authors and readers, and it came complete with well-known authors, dignitaries, and small publishers as well as offering author workshops and panels.

Did I mention it was free? Now these are the kind of conference/literary events that should appeal to all authors wanting to build a fan base AND do some skill building at the same time. It was a one-day event that was close to home and free. (Love that sentence.)

The first workshop of the morning was led by T.K. Thorne, an award-winning author who is both traditionally published and self-published. (Spotted in her audience, way back in the left far corner, is City of Mobile Mayor William “Sandy” Stimpson. Hmm, a memoir, perhaps?)

A workshop led by Carrie Dalby, our local Society of Children’s Book Writers and Illustrators liaison and the author of two YA novels, covered the things that differentiate books in all age levels—from baby books and picture books to young adult novels.

Angela Quarles, the 2016 RITA Award winner for Must Love Chainmail, led a “plotting 101” workshop, exploring the importance of plot in genre fiction and the three-act structure.

Did I mention that all this was free? I know I did, but I wanted to say it again.

The idea behind this post is to remind authors that you don’t have to search far and wide for networking conferences and skill-building workshops that are offered at minimal or no cost. Take advantage of all the events offered at your local library and/or local writing group. Networking with other writers, whether in person or on-line, is as much a skill-building activity as a workshop might be.

Be sure to stop by Wednesday for a guest post from author R. V. Reyes, discussing readers’ increasingly loud calls for more diverse characters in fiction writing. 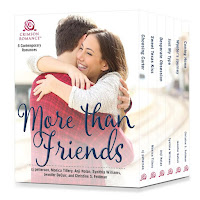 cj
PS:  It’s getting awfully close to some important gift-giving holidays. May I suggest, for 99 cents, a gift of six novels that will give hours of entertainment to your favorite romance reader: “More Than Friends,” available now until February 2017 for less than a buck. A great deal…and one that includes my novel, Choosing Carter!    http://amzn.to/2dnqnLJ