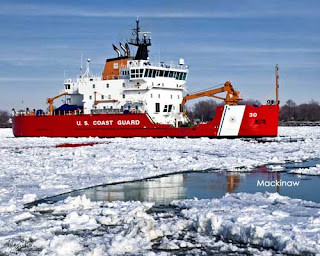 Three Coast Guard cutters gathering at the Soo Locks will open shipping channels in Whitefish Bay and Thunder Bay, Ontario, Canada, to facilitate $500 million worth of commercial traffic during the shipping season. In an average year, the Coast Guard breaks ice for 120 days. Whitefish Bay on the eastern end of the southern shore of Lake Superior is 90 percent ice-covered. There are windrows of ice piled four feet in upper Whitefish Bay.

The U.S. Coast Guard operates nine ice-breaking-capable cutters on the Great Lakes, including the heavy ice-breaking Mackinaw. At 240 feet in length, the vessel, with a crew of nine officers and 46 enlisted personnel, can break solid ice up to 42 inches.  (Excerpted from the DetNews.com, March 23, 2018)
**
cj Sez: Ice 42-inches thick? I moved from Michigan to the Gulf Coast, so let's get back to my personal reality… 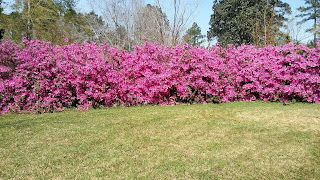 The above is a picture of about 50 feet of my side yard in Mobile. The picture was taken March 8. What a difference 1,300 miles makes.
**
Some things to remember when writing historical fiction manuscripts:

First, as with all stories, well-developed conflict drives the plot.

Historical characters, their dialogues and dress have to be appropriate to the time and setting.

Believe it or not, sailors in the 17th and 18th centuries pioneered the wearing of trousers ("slops") made of a denim fabric called “jean.” but the plural term “jeans” wasn’t used in the United States until 1843.1

The things that fill the scenes have to belong there. Examples:
Incandescent lights didn’t exist before the late 1800s.2  Before 1947 the number of U.S. homes with television sets could be measured in the thousands.3 (It's likely that very wealthy people may have had one.)

Don’t beat your reader over the head with all the historical details you’ve discovered...the dreaded info dump.
Historical elements are essential but mustn’t be boring. They should be blended into the plot. You want these details to draw the reader deeper into your story.

All of the above points directly to long hours of exacting research to write a historical fiction novel. Keep in mind, if a history buff reading your novel spots an error s/he considers egregious, your Amazon review will not only reflect that reader’s disappointment but can deflect potential buyers as well.

1 http://www.levistrauss.com/wp-content/uploads/2014/01/A-Short-History-of-Denim2.pdf
2 https://www.energy.gov/articles/history-light-bulb
3 https://www.nyu.edu/classes/stephens/History
That’s it for this week’s post. Please let me know if you found a nugget in here you can use or improve upon.