cj Sez: To say the weather is sweltering where I live would be an understatement. Today’s heat index reached triple digits…something like 110°. Needless to say I was not outdoors. 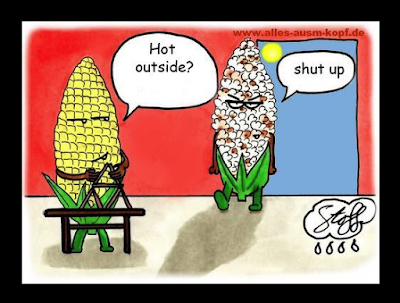 The following is an excerpt from comments by someone defending about fifty percent of the U.S. population (i.e. potential buyers and readers of books), from the published comments of an author. Given the penchant for hateful posts and responses I’ve seen on the Internet, I choose to keep the combatants anonymous.

“The other nakedly called supporters of POTUS45 bigots, xenophobes, homophobes, misogynists, etc. on Twitter. So I called him out that if that sizable chunk of his reader base is that awful, would be (sic) be magnanimous returning their money for previous book purchases--hashtag, don't bite the hands that feeds you/sh*t where you eat."

cj Sez: I happen to believe authors don’t have to agree with their readers’ (or other authors’) choices, and vise versa. But offending potential buyers/readers with personal diatribes is like cutting off your nose to spite your face (seemed like an apt cliché). Publishing insults is not the way to increase readership. (It’s all about the marketing.)

"…authors MUST be personable, engaging, in tune with their audience(s), and just plain-out decent folks. These people PAY their royalties, and word-of-mouth will make or break an author when writers are their readers, too . . . and word ripples to non-writers about this or that author's sourness. In this age of social media, you cannot afford to be a nekkid jerk. If you're raking it in, okay; if you're not, don't. Just don't in general, but that's just me :-).”

cj Sez: I’ll admit, I have, on occasion, like the angry responder above, felt the need to respond to comments that ticked me off. I’ll write down my outrageous rant on a “mad pad.” (I like pressing the pen down hard onto the paper and leaving imprints on the page behind.) When I’ve gotten the anger out of my system, I put the mad pad aside for a while, then either edit out the anger and post an abbreviated response, or wad up the paper and don’t respond at all.

Have you had a similar encounter of feeling insulted in print--where the published word "seems" to carry more authority? How did you handle it?

On a happier note, my grandson called this afternoon and invited me to dinner tonight. A spur-of-the-moment invitation that told me he was thinking about me. Now that he’s working, it was his treat. Love that kid.

For great vacation reads, available on Amazon, pick up a copy of:

Back of the book blurb: "cj petterson has crafted a tale of murder, espionage, and romance which builds to a dramatic and satisfying conclusion. With a gift for well-written dialogue and a deft touch at creating suspense, Ms. petterson delivers a must-read story in Deadly Star."  Rebecca Barrett