Welcome to the first day of fall. 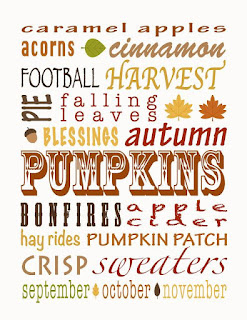 Since this post is going live on Sunday, Sept 23, I said “first day” because, officially, my local autumnal equinox occurred at 8:54 p.m. C.T. Saturday evening, Sept. 22.

What is the autumnal equinox, you ask? According to my eNews source, it's actually a dual-purpose event. It marks the beginning of fall in the Northern hemisphere and the beginning of spring in the Southern hemisphere. If you are geographically challenged, it means at 8:54 p.m. C.T. on Saturday, Sept. 22, autumn began officially in my space in the world, but a different season began on the other side of the equator:  Spring began on Sunday, Sept 23, at 3:54 p.m. S.T. in South Africa and at 11:54 a.m. E.T. in Australia. These time zones can be so confusing. The equinox does have astronomic logic to it, albeit some of it based on scientific imagination. 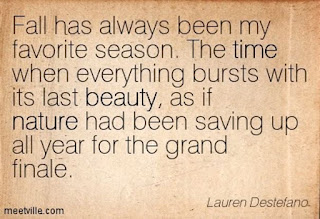 The word “equinox” means “equal nights.” Equal nights happen when the sun’s rays are exactly over the earth’s celestial equator, which is really an imaginary line: an abstract projection of the terrestrial equator into outer space. The terrestrial (or geographic) equator divides the Earth into the Northern and Southern hemispheres…0° latitude.

The other thing to remember is that after the equinox, the length of the days changes. They get shorter and cooler in the Northern hemisphere and longer and warmer in the Southern hemisphere.

Just thought you’d like to know, because maybe you can find a use for some of it in one of your novels. Setting is one of the more important pieces of a good scene, and weather will inevitably play a part in that. Personally, I’m looking forward to days when the heat and humidity along the Gulf Coast aren’t combining to reach triple digits. My protagonist is doing the same thing.

***
I just re-read a Jane Friedman** post that said that the main character might not really change at all, that the change readers see may be an illusion; that is, forces and circumstances in the story have created outcomes that cause the character to reveal his or her true self.  What do you think? 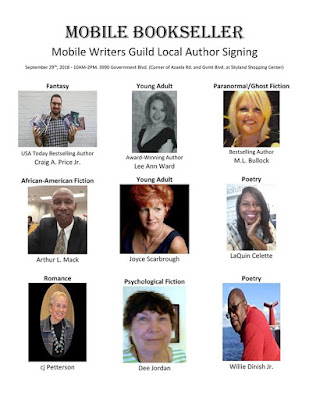 Local authors are being featured. If you’re in the area, please stop by and say hi. I might be handing out candy…if it doesn’t melt first.

***
Books are acts of composition: you compose them. You make music: the music is called fiction.
.... E. L. Doctorow

Writers, if you have a book launch coming up and want to schedule a post on Lyrical Pens for your blog tour, drop me a note.

That’s it for today, folks. You-all guys keep on keeping on, and I’ll try to do the same.

cj
Stop by Amazon and pick up copies of DEADLY STAR and CHOOSING CARTER, (to keep me in good standing with Simon&Schuster), and if you take a moment to leave a review (good, bad, or just “I read this one”), I shall be forever grateful.
Qrtly newsletter sign-up:  cjpetterson@gmail.com
cjpetterson/author on Facebook
Amazon Central Author Page =  https://amzn.to/2v6SrAj
Simon&Schuster Author Page = https://bit.ly/2uo1M0Z