Barbara Neely, best known for her Blanche White series, was selected as the 2020 Grand Master, the annual mystery convention Left Coast Crime received the 2020 Raven Award, and Kelley Ragland, associate director and editorial director of Minotaur books, received the Ellery Queen Award. The awards will be handed out at the 74th Annual Edgar Awards Banquet in New York City on April 30, 2020

"You can’t wait for inspiration. You have to go after it with a club."  …Jack London

///
cj sez: A little history of my writing career…
My first interest was in screenwriting. I flew from Detroit to San Francisco to take Robert McKee's three-day seminar on STORY.


The experience was invaluable because I learned to visualize my story and how to write in terms of the characters’ action-dialogue-and scenes that show the story. How characters react and what they don’t say can speak volumes. This is where their actions speak louder than words. This is deep point-of-view writing.

I’ve talked with writers who visualize some movie star or other playing a character in their books. Is that something you do?  I like to visualize the whole characterization—I’ll leave it to Stephen Spielberg or Francis Ford Coppola (ha ha) to find the best mega-star for the role.
///

There are only ten (10) more days until Christmas.  If you’re still wondering what to give someone, give them an adventure…give them a book—a gift they can open again and again.

That’s it for this week’s post. You-all guys keep on keeping on, and I’ll try to do the same. See you here on Lyrical Pens next week. 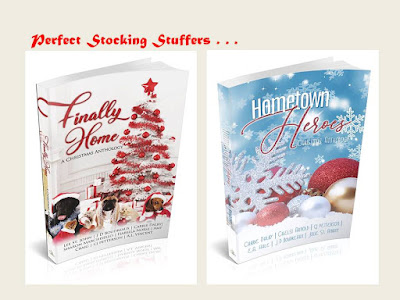 Part of the proceeds from both of these Christmas anthologies will benefit a charity.

If you’re in the Mobile area, do stop in at the book store; it’s a neat place to browse. These friendly people make a point to shelve the books of local authors, and FINALLY HOME will be available there soon. If they don’t happen to have any copies of the book you want, they’ll order it for you.

➜ Follow me . . .
➜   on Amazon: Amazon Central Author Page = https://amzn.to/2v6SrAj
➜   on Facebook at:   cjpetterson/author/facebook
➜   on BookBub:   https://www.bookbub.com/authors/cj-petterson
Posted by cj petterson at 4:00 AM