cj Sez: As I shelter in place, it seems I’m less inclined to write even tho I’ve always complained I didn’t have time. I used to have a little wooden disc on which the words To It were inscribed, but I gave it away to a poet I know.**

Now I’ve had to resort to putting a note on my computer that says, BIC …FOK (butt in chair, fingers on keyboard). Today I added: BIG (brain in gear). As a writer who loves the music and rhythm of words, I find it sad that my speech and writing have dissolved into runes.

Here’s what’s going on in the publishing world:

Congratulations are in order! In case you missed this: From The Short Mystery Fiction Society comes a list of finalists for the 2020 Derringer Awards for outstanding short stories published in 2019:

A vote of the SMFS membership will determine the winner in each category. Results will be announced in May 2020.

Got a book ready to launch? Here’s something to consider: https://www.publishersweekly.com/pw/by-topic/industry-news/publisher-news/article/82917-new-releases-struggle-to-find-an-audience.html

I found the following message of hope on Facebook and shared it with my followers there . . . I want to share this with you also. The message is current, yet the poem was published in 1869.

And people stayed at home
And read books
And listened
And they rested
And did exercises
And made art and played
And learned new ways of being
And stopped and listened
More deeply
Someone meditated, someone prayed
Someone met their shadow
And people began to think differently
And people healed.
And in the absence of people who
Lived in ignorant ways
Dangerous, meaningless and heartless,
The earth also began to heal
And when the danger ended and
People found themselves
They grieved for the dead
And made new choices
And dreamed of new visions
And created new ways of living
And completely healed the earth
Just as they were healed.

The poem was written about ten years after the Irish Potato Famine that occurred in Ireland in 1845–49, caused when the potato crop, the population’s main food source, failed in successive years. https://www.britannica.com/event/Great-Famine-Irish-history

Kathleen O’Meara was the pen name Grace Ramsay. O’Meara was an Irish-French Catholic writer and biographer during the late Victorian era. The Paris correspondent of The Tablet, a leading British Catholic magazine, she also wrote works of fiction where she explored a variety of topics from women’s suffrage to eastern European revolutions. 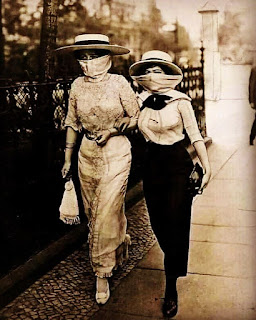 The poem was reprinted during 1919 Spanish flu pandemic…

The photo right was taken during the Spanish flu pandemic.

“Worrying does not empty tomorrow of its sorrow; it empties today of its strength.” – Corrie ten Boom

If you don’t know who Corrie ten Boom is, she’s a survivor worth researching.

It’s coming up on income tax time, and here’s some info for writers: https://writersinthestormblog.com/2020/04/tax-time-chat-for-authors/

The Alabama Department of Revenue announced that their income tax filing due date is extended also…Read more here: https://revenue.alabama.gov/individual-corporate/due-dates/

Not in Alabama? Check with your state’s Department of Revenue.
Reminder: The 2020 U.S. Census is ongoing and the State of Alabama posted the following…but consider that every state in the Union has similar needs.

Economic Development: It is important that Alabama have accurate data to encourage new businesses to enter the state and to encourage local retail growth. Economic development and industry are critical to the quality of life here.
Rural Growth: The Census will play an important role in determining funding that positively impacts rural Alabama. The data collected will inform more than $675 billion in federal funding allocations to the states for programs like water and waste disposal systems in rural communities. Programs like Cooperative Extension Program, Community Development Grants, and Rural Rental Assistance Program are depending on this complete count.
Congressional Representation: Without a complete count, our state will lose one or possibly even two congressional seats in Washington D.C. That is two less voices to stand up for Alabama.
Federal Funding: $13 billion is on the line. Without a complete count, Alabama will lose money that supports our education system, police force, infrastructure, roads, and healthcare.
/// 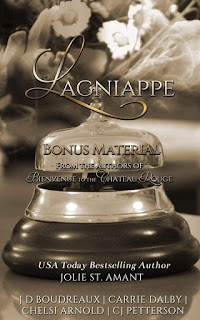 The authors of the upcoming release, BIENVENUE to the CHATEAU ROUGE, have joined together to give you a little Lagniappe (a little something extra). This collection of novellas and short stories gives you a sneak peek at the writers who have stories included in this May release available for preorder now.
Read the teasers and download a copy here   https://bit.ly/2WNYDtu
///
That’s it for this week’s post. You-all guys keep on keeping on and I’ll try to do the same.

cj
(** That little token kept me from procrastinating … I couldn’t tell myself I’d do something when I got “a round To It” because I had one.)

My paranormal, short story, “Love is Immortal” is included in a new anthology scheduled for release later this spring. Watch for more on the launch of BIENVENUE to the CHATEAU ROUGE on Facebook and Amazon.

My novels CHOOSING CARTER and DEADLY STAR are out of print, but I have a few autographed copies available at The Haunted Book Shop. Anthologies in which I have stories, including THE POSSE, the Bienvenue Press Christmas charity series, and the Mobile Writers Guild PIECES series are also available there.

If they don’t happen to have a copy of any book(s), by any author that you want, they’ll place an order for you.

TO ORDER (and support an indie bookstore) contact The Haunted Bookshop here: The Haunted Bookshop  Angela Trigg, the awesome owner and an award-winning author in her own right (writing as Angela Quarles) will be happy to ship you the book(s) of your choice. If you’re in Mobile area, do stop in at the book store; it’s a neat place to browse.
➜ Follow me . . .
➜         on Amazon: Amazon Central Author Page = https://amzn.to/2v6SrAj
➜         on Facebook at:   cjpetterson/author/facebook
➜         on BookBub:   https://www.bookbub.com/authors/cj-petterson