To Honor Those Who Gave Their Lives in Combat

cj Sez:  “Those who have long enjoyed such privileges as we enjoy forget in time that men have died to win them.”  - Franklin Delano Roosevelt 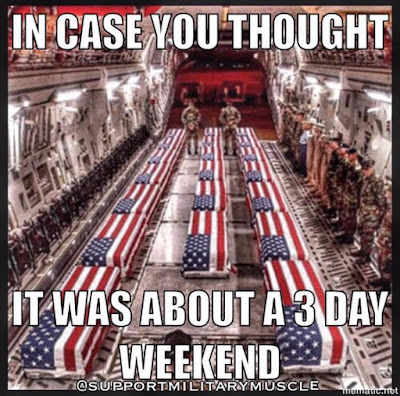 Parades and outdoor get-togethers mark Memorial Day, often considered the unofficial start of summer. But the day is about much more than that.
Memorial Day is a day set aside as a national remembrance of the men and women of America’s armed forces who died in combat to preserve this country’s freedoms. It is about a demonstration of gratitude for their ultimate sacrifice. 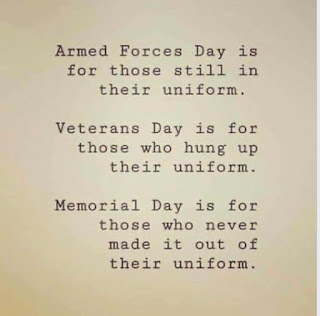 The modern observance of Memorial Day began after the end of the bloody Civil War. More than 622,000 Americans, from the North and the South, died in those four years of battles.

“Three years after the Civil War ended, on May 5, 1868, the head of an organization of Union veterans —the Grand Army of the Republic (GAR)—established Decoration Day as a time for the nation to decorate the graves of the war dead with flowers. Maj. Gen. John A. Logan declared that Decoration Day should be observed on May 30. It is believed that date was chosen because flowers would be in bloom all over the country.

“It was not until after World War I, however, that the day was expanded to honor those who have died in all American wars. In 1971, Memorial Day was declared a national holiday by an act of Congress, though it is still often called Decoration Day.” 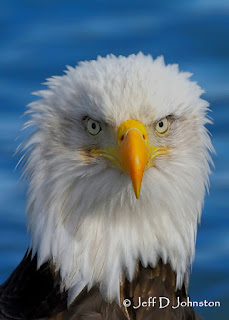 On the home front:
Son Jeff D. Johnston’s photo of America’s National Symbol.
The American bald eagle was chosen as the nation's symbol because it represents courage, strength, and freedom.
cj Sez: And I chose this eagle picture for today's post because I love that guy's attitude.
§§
Writerly/Readerly quotes:
“There are perhaps no days of our childhood we lived so fully as those we spent with a favorite book.” — Marcel Proust
§§
And now a few words from my sponsors:
My newly released thriller/suspense novels are available in eBook and paperback for you to read, enjoy, and (hopefully) review:
DEATH ON THE YAMPA: Grab the eBook copy of your next new adventure here:   https://books2read.com/u/bxe1AP

The paperback is available on Amazon here:  Buy Paperback Yampa

here:  Amazon Buy Now  and buy the eBook from your favorite E-retailer, including Kindle, here:   https://books2read.com/u/3LRRG5
§§
That’s it for today’s post. You-all guys keep on keeping on, and I’ll try to do the same.
cj
P.S.  TO ORDER my books or any book of your choice on-line and support an indie bookstore, contact The Haunted Bookshop here: https://www.thehauntedbookshopmobile.com/contact-us
If you’d like me to autograph or personalize it for you, be sure to tell them.
The Haunted Bookshop has re-opened to limited hours (and they have an awesome bookstore kitty, Mr. Bingley), so if you’re in the Mobile area, you can stop and shop, too.
➜ Follow me . . .
➜ on Amazon:    Amazon Central Author Page
➜ on Facebook:  https://www.facebook.com/CjPettersonAuthor
➜ on BookBub:   https://www.bookbub.com/authors/cj-petterson
➜ on Goodreads: https://bit.ly/3fcN3h6
Posted by Lyrical Pens at 4:30 AM