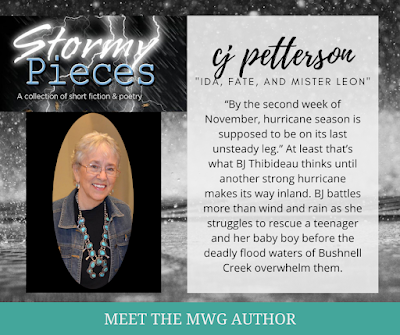 “Today we asked suspense writer cj petterson Author what inspired her short story, “Ida, Fate, and Mister Leon.”
(And cj Sez:) “The idea for my story started way back in 2005 when I saw a writing prompt about a woman doing a traditionally man’s job. I wrote a few pages featuring an unnamed November storm then buried the draft in an “Ideas” file.
When the MWG published a call for submissions for STORMY PIECES, I thought, “Eureka! I’ve already written that story.” So I dug it out and named the November storm Hurricane Ida, after the one that meandered around the U.S. in 2009.
And (pinky-swear), I submitted my story on February 11, six months before 2021’s Hurricane Ida devastated the Gulf Coast and northeastern U.S. on August 29."
If you’re in the Mobile area, anthology copies, as well as cj’s thriller/suspense novels, will be available at The Haunted Book Shop, 109 Dauphin St in Downtown Mobile for an ArtWalk book signing, November 12th, 6-8pm”
Available for preorder   Buy Stormy Pieces Now
§§
NEXT SUNDAY IS HALLOWEEN
Wow, where did the year go? To get you in the mood, I’ll suggest an anthology to read before ghosts, goblins, witches, and troops of trick-or-treaters come knock, knock, knocking on your door.
Halloween Pieces, the fourth installment in the Mobile Writers Guild anthology series, has an eclectic collection of stories, poems, and a play that explore the chills, thrills, and giggles of the day. Halloween is the theme, but every piece is an enjoyable read for any season.
My short story, “Once in a Blue Moon,” (a fantasy mystery so named because Halloween fell on such a rare event in 2020) is one of 18 pieces in the anthology.
At the time of this post, HALLOWEEN PIECES is free on Kindle Unlimited and $1.99 to buy for your own library.
§§
MARK YOUR CALENDARS
On November 10 author Barbara Hinske arrives to do a guest post about her soon-to-be-released The Unexpected Path. You’ll read of her deep and emotionally charged dive into first-person research for her story about the struggles and victories of newly blind Emily Main and her guide dog.
§§ 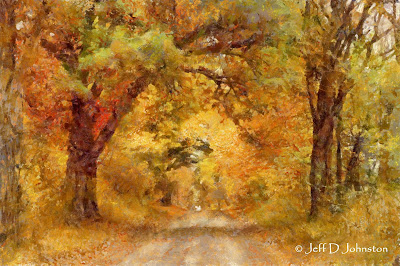 The Yellow Wood … Jeff D. Johnston photo computerized to resemble a painting.
§§
STILL ON SALE:
The ebooks of DEATH ON THE YAMPA and THE DAWGSTAR are on sale @ only $1.99 each. Fast-paced and exciting suspense, with a touch of Jane Bond romance. Available at your favorite eTailer, and on request from your local library—just provide them with the ISBN number.
§§
cj Sez: That’s it for today’s post. You-all guys keep on keeping on, and I’ll try to do the same.
§§

P.S. TO ORDER a book by any author on-line and support an indie bookstore, contact The Haunted Bookshop here: https://www.thehauntedbookshopmobile.com/contact-us
If you’d like me to autograph or personalize one of my stories for you, be sure to tell them, and I’ll run by the shop.
➜ Follow me . . .
➜ on Amazon:    Amazon Central Author Page
➜ on Facebook:  cjpettersonAuthor on Facebook
➜ on BookBub:   https://www.bookbub.com/authors/cj-petterson
➜ on Goodreads: https://bit.ly/3fcN3h6
Posted by Lyrical Pens at 4:30 AM