cj Sez: Today is a day to remember the terrorist attacks of September 11, 2001, and to honor all the victims in the buildings and the first responders who rushed into burning infernos to rescue as many people as they could.
At the Rosemead, CA, City Hall - The sculpture consists of an iron beam pulled from the rubble of the World Trade Center held up by two stainless steel hands. The hands holding it up are constructed from 2,976 individually crafted stainless steel doves - each representing a victim of the attacks. (Ironworkers)
Burned into America’s collective memories—like The Alamo and Pearl Harbor—the September 11 attacks were a series of coordinated terrorist attacks. Nineteen members of al-Qaeda hijacked four passenger-filled, commercial airliners and committed murder and suicide. Two aircraft were deliberately flown into the World Trade Center buildings in New York City, a third tore into the Pentagon in Arlington County, Virginia, and the fourth crashed into a field near Shanksville, Pennsylvania. The attacks killed nearly 3,000 people.
I will never forget where I was that awful day. Do you remember where you were?
§§
The political jabberwocky being produced in the news media every day is making me crazy. I’ve come to the conclusion that I’m being exposed to the following kind of propaganda: 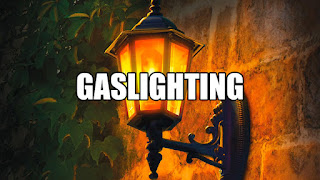 “The meaning of GASLIGHTING is psychological manipulation of a person usually over an extended period of time that causes the victim to question the validity of their own thoughts, perception of reality, or memories and typically leads to confusion, loss of confidence and self-esteem, uncertainty of one's emotional or mental stability, and a dependency on the perpetrator.”
How to protect *oneself? Read and listen with an inquiring mind to more than one source of information/news media.
§§
For readers and writers
From a Google search:  The difference between *oneself and one's self is not just a matter of grammar. The meaning is different. While “oneself” means that someone does something to or for themselves, “one's self” refers to the “self” that belongs to “one.”
Because I cringe when I read: “We lead all the way yesterday, and we won!” The past tense of the verb lead is led, not lead, (Yeah, I know, the correct spelling of the past tense of read is also read. We all know the English language is difficult.)
§§
Lyrical Pens blog will be on hiatus until October 9 …
but you can still contact me
at cjpetterson@gmail.com or at my Facebook page.
That’s it for today’s post. You-all guys keep on keeping on, and I’ll try to do the same. Raising prayers for your health and safety.
cj