Here is the other great Halloween piece that disappeared into my pc infinity file in October of this year. No one knows how the computer chooses which files to snatch, sending a scream into the night. In October's Stuff and Nonsense contest, Candice Conner got her weird on and created this little piece, nothing short of Tim Burton's fantasies. Candice also won a free edit of the first ten pages of her current WIP from yours truly, which, hopefully, makes up for the Fleeing Files of Fall.
Put down your chocolate flavored liqueurs and slip into a little macabre on this bright December day.
Mahala
A Cemetery for Strangers


Candice Marley Conner
Olive is by herself at night in this cold place, but she doesn’t mind. The caring sort of grown-ups think she’s too little to be out here alone, but that’s just because they don’t understand where she came from. Olive knows she’s safer here. 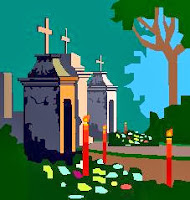 There hasn’t been a home since her daddy died in a fishing accident off Dauphin Island; her mama now who-knows-where with who-knows-who.

In her experience, knowing folks got you hurt—and worse, killed. Just look at Mr. Frost and Mr. Boyington!

Maybe townspeople didn’t think too highly of them because of their card-playing ways, but they showed Olive kindness when they’d come here to pick blackberries or read poetry. Olive’s favorites were the poems by Mr. Poe though Mr. Frost thought her tastes a bit macabre.
She’d been asleep when Mr. Frost was stabbed. She inspected the scene the next morning after everyone left and stuck her finger in the pooled blood that dotted the blades of grass like morning dew.

And poor Mr. Boyington, lost his best friend and then accused of his murder!

Olive was there when they tried to hang him. She gave him a timid wave as he jumped, wide-eyed from the wooden scaffold. Olive was nearly trampled as the law scrambled to catch him, then dragged him kicking and screaming out his innocence until it echoed off the oak trees, knocking birds from their perches.

Between her fingers, Olive worried an acorn as she watched him, quick as a polecat on fire, duck the hangman’s noose. She bit into it at the exact moment when the law, giving up, tossed him head first off the platform. The crack of his neck echoed in her own head as the shell burst in her mouth. She spit it out in horror.

Now, she counts her acorns as she huddles in the shadows of a sun-warmed sepulcher. She hears footsteps approach, and counting on the charity of strangers, peeks out from around the stone.
Church Street Cemetery is quiet until the loud, haunting scream rings out near midnight .

Please give Candice and Judy feedback on their short, short stories. Authors love feedback. You know you do!
Posted by Mahala Church at 11:25 AM