Writing is . . . editing and change 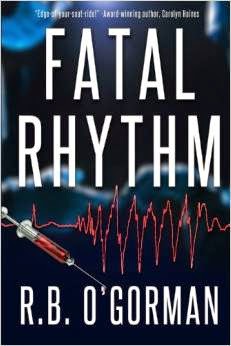 Exciting new medical mystery/thriller available now on Amazon! FATAL RHYTHM, by my friend Dr. Ron B. O’Gorman . . . a real-life cardiologist who tells a great story. Check it out: http://urls.ht/2e2

cj Sez:  This time, I’m excited to again talk with you about my process of writing a novel.

I didn’t start writing seriously until I moved to Mobile in 2002. Since then, I’ve written a few personal essays and short stories that I was fortunate enough to have published in several different anthologies. When Crimson Romance published my first novel, DEADLY STAR, in 2013, my sister said, “You wrote a whole book, all by yourself?”

My first interest was in screenwriting. In 2001, I think it was, I even flew from Detroit to San Francisco to take a three-day seminar from Robert McKay who published a book called STORY and conducted seminars in different cities around the United States.

The experience was invaluable because I began to visualize my story writing in terms of the characters’ action-dialogue-and scenes that show the story. How characters react and what they don’t say can speak volumes. I’ve talked with writers who visualize some movie star or other playing a character in their books—is that something you do?  I can’t do that. I don’t see a specific person, I visualize the whole characterization—I’ll leave it to Stephen Spielberg or Francis Ford Coppola (HA), to find the best mega-star for the role.

For most us, and I am very much included in that generalization, we have a wonderful idea on a theme. We also know how we want the story to end, so that’s all set. It’s the middle that really gets us. It wants to sag. Like an old married couple, sometimes the excitement fades away. Unless we work at it.

Working at it probably means changing some things around. For me, changes in the middle almost always mean rewriting the first chapter more than a few times. To help me out, I usually read the dialogue aloud. Does it sound natural? Are the sentences so complete and full of blah-blah information that they slow the pace of the story?  This can happen anywhere, but it very often happens in the middle part of a story when we’re trying to get the word count we want. I might need to reinvent someone … add another challenge (read that, conflict) for the protagonist to bring back the thrill.

For me, writing any story is all about editing and change—once I get through the concept and research stages, of course. Sometimes, I see a need to change a character’s name, a story thread, a sentence structure, or, as is true for DEADLY STAR, the whole genre.

DEADLY STAR didn’t start off as a romance. Over the course of writing and editing the manuscript—which took about four years—one of my critique partners thought the story might be marketed as an action/adventure. Another said it was a woman-in-peril story, a third said political thriller. Someone even floated the idea that it was sci-fi.

Then, because there was a love scene in the story—let me add a disclaimer here, it isn’t a bodice-tearing romp—I recklessly entered excerpts of the manuscript into two romance contests. The judges in each thought the concept and the story were good, except it needed a happily ever after ending. I decided it might work as a romantic suspense novel if I made a change, or three, within the manuscript and, of course, changed the ending.

Crimson Romance offered me a contract about three weeks after I submitted my e-query and synopsis, and I knew I’d stumbled…been pushed…into the correct genre.

The message is: Don’t be afraid or unwilling to make changes in your manuscript but do so with a caveat. Before you make wholesale changes, be sure you’ve looked at the manuscript as objectively as possible. Put the piece aside for several days at least, more if possible.

You can ask any of my critique partners and they’ll tell you I’m making changes to my WIP as the pages leave my computer and head for theirs. I’ve been known to send an immediate follow-up note screaming in all capital letters . . . DON’T PRINT WHAT I JUST SENT YOU. HERE’S THE LATEST AND GREATEST.

After working with CEOs and vice presidents and directors who loved to thumbprint every piece of paper that crossed their desks, I do understand that my words, no matter how beautiful I think they are, are not carved in stone. But, if I can’t use them in one story, I’ll save them for another.

When I do need to consider a change to my manuscript, I try to keep in mind that, as one of my critique partners always says, I am the captain of my story. Change can be a good thing, but to change or not to change is up to me.

That’s all for now. You-all guys keep on keeping on, and I’ll try to do the same. And to all my writer friends, I hope everyone is happy in your head . . . we're all doing pretty well in mine.