Friends and things to do 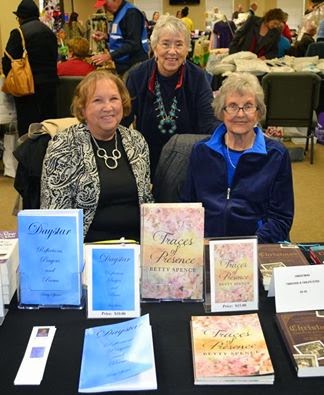 cj Sez:  I had the good fortune to spend a few hours with two of my Mobile, AL writer friends at the Dauphin Way Baptist Church Expo recently. Betty Spence, whose newly released book of poetry “Traces of Presence” is wonderful, and award-winning poet and writer Mavis Jarrell who has a new short story out in the “Chicken Soup for the Soul The Power of Forgiveness” anthology. (Both of these books are available at Barnes and Noble.) The all-day affair had more than 100 different vendors of unique crafts, food, music. Doesn’t get much better than that.


I’ve been toiling on the synopsis for my unnamed work-in-progress. As is my wont with all my manuscripts, the starting sentence has been re-worked a dozen times or more to fit what I am saying further down the page.  Basically, the starting sentence is my elevator pitch . . . twenty-five words that might pique the curiosity of an agent in the few seconds I have if we’re caught on an elevator together.


For the rest of the document, I’m taking each chapter and creating a synopsis about it. The document will be chronological in terms of where things happen in the manuscript, and all the story threads will be neatly tied up, but it will include only major characters and major scenes.


When I’m finished with the whole thing, I’ll ask another writer if (s)he can make sense of what the story is about and are there questions that need answering. Then I’ll get into edit cycle four, five, et al.


FYI, here’s how the current synopsis begins . . . as copied directly from my document:


A woman’s brother escapes from prison, setting off a chain of deadly events that threatens a town and pits him against the man she loves.


When BRYN McKAY, a freelance marketing consultant living in Colorado, tries to get her brother sober, they end up in near-tragic truck accident that lands him in prison. ROBBIE McKAY becomes a jailhouse convert to Islam, escapes, and vows to exact revenge on the people he believes put him there, including Bryn.


Bryn loves and is in pursuit of naturalist and outdoor guide, CARTER DANIELSON—she thinks he’s beautiful (he is). Part Cherokee and part Swedish, blue-eyed and mocha-skinned Carter is a recovering alcoholic that balks at romantic commitments. That makes him all the more attractive to her, and she hypothesizes, You’d be so easy to love. If only you’d let me. A visit from the FBI, a threatening phone call from Robbie, and a break-in at her home persuade Bryn that Carter might be right when he says she’ll be safer if she celebrates her birthday on a Yampa River rafting trip with him. She doesn’t really believe her brother is a serious threat to her, but the thought of rafting the beautiful river canyon of Dinosaur National Monument is too appealing to pass up.

Here's your chance. Tell me what you think. Would you like to read more of this story? I’d love to know why or why not.


cj
PS:  Did you remember to “Spring Forward?”