cj Sez:  I wish I had a bit of Elmore Leonard’s discipline for sitting down and going about the business of writing. What started as necessity for him turned into habit when he became an established author.

“To support his family, he worked as a copywriter at an ad agency, where he developed his aversion to adverbs, and also his knack for brief, punched-up prose. He began a habit of waking at five a.m. and immediately starting to write -- not even putting the water on for coffee until he had something down on paper -- then going to work at the office, first in advertising and later writing educational films for the Encyclopedia Britannica.” (Source: http://www.biographile.com/a-capital-crime-elmore-leonard-deserves-a-definitive-biography/22523/ )

It used to be that I worked better when I had to crash for a short-term deadline. So I thought if I gave myself a deadline, I’d have the incentive to keep writing. Found out that’s not true because somehow I seem to know the deadline is self-imposed. (As if.) I manage to bury my deadline under weeks of procrastination that I call “research.” (Leonard paid others to do his research.) It seems that the more research I do—I learn really fascinating things—the less creativity I have. 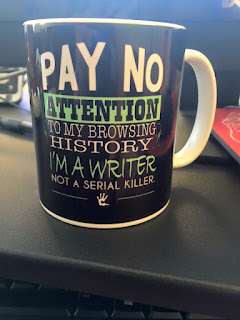 However, I’m not giving up on my current work in progress. Last night I made a note or two when I went to bed . . . I get a lot of good ideas just before I fall asleep. That’s why I keep paper and pencil on the table next to the bed.
I don’t sit in front of this computer very long on Sundays but I’ll start writing on Monday … right after I feed all the critters, including me, do some weeding or picking up pine cones and deadfall, do a bit of housecleaning, and by then it’s time to watch the news at 5, 6, and 6:30. After I make supper and do the dishes, I’ll put BIC in front of the computer. But I promise you I won’t make any deep dives down research rabbit holes. (I need to promise you because if I promise myself, I’ll find something irrelevant to do.) 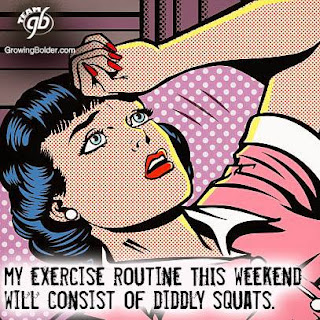 How about you? When do you get your best ideas? How do you conquer the blank page in front of you? How do you stay out of the research rabbit holes? I really need some help.

The international writing organization Sisters in Crime (of which I am a member) announced their Eleanor Taylor Bland Emerging Crime Writer of Color Award Recipient:

“We'd like to congratulate Shizuka Otake of Jackson Heights, NY on being named the 2022 Eleanor Taylor Bland Emerging Crime Writers of Color Award Winner! Her submission, Murder in Tokyo, is a story of a Japanese American teen’s life which is shattered when her boyfriend is arrested as the prime suspect in a classmate’s murder. “I lived in Tokyo as an adult and found it painful to be viewed as different,” said Otake. “I expected to fit in and wondered how much harder that experience would have been if I was a vulnerable teen.”

Otake’s story was selected from more than fifty submissions

Gremlins
Over the past week, Blogger re-issued Lyrical Pens posts for December 5, 2021, and January 2, 2022. I guess Google's been messing around with their programming and LP subscribers received an auto-idiot email. I’m wondering how many posts will be reissued before they correct the problem. Sorry about that, but I can issue a true disclaimer: I didn't do it.
§§

By the by, as the masthead above says, if you have a book (new or old) you want to promote with a blog post, drop me a note. We can arrange a blog date…the only caveat is that this site is PG 13.

That’s it for today’s post. You-all guys keep on keeping on, and I’ll try to do the same. Prayers going up for your health and safety. 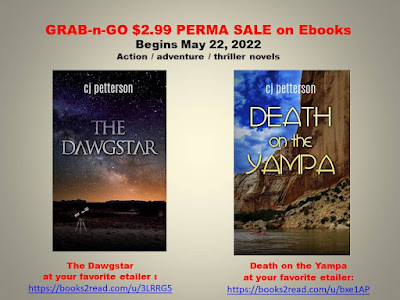 P.S.  The Haunted Bookshop has signed Paperback copies of my books in stock. TO ORDER my author-graphed books or any book of your choice on-line from an indie bookstore, contact The Haunted Bookshop here: https://www.thehauntedbookshopmobile.com/contact-us
P.P.S. Pre-signed copies of THE BIG FANG are not available at The Haunted Bookshop, but when you order a book from them and want it author-graphed, let them know, and I'll pop down there and sign it for you. Thanks!
➜ Follow me on . . .
➜ Amazon:    Amazon Central Author Page
➜ Facebook:  https://www.facebook.com/CjPettersonAuthor
➜ BookBub:   https://www.bookbub.com/authors/cj-petterson
➜ Goodreads: https://bit.ly/3fcN3h6
Posted by Lyrical Pens at 4:00 AM