Have you ever gotten a book that won a list of impressive awards, maybe the Pulitzer Prize, and found it utterly boring and laborious to slog through? That has happened to me far too many times. Years ago, I thought I must be missing some major cell that the “smart people” were given on a day when I stepped out of the room. Thankfully, that hasn’t’ been my thought process for many years. I am a well-read person; one might say an avid reader at two or more books a week. I write book reviews for several publications. I teach creative writing. My little gray cells are not the problem.

There must be an incentive to write these incongruous missives, perhaps new authors of similar books are ceremoniously inducted into the exclusive club of their predecessors in a cloistered, circular room sans windows. The opulently decorated room can only be accessed via an intricately carved ebony door, opened by an ancient key entrusted to the Sovereign Ruler of All Things Obscure (SROATO). Wearing burgundy velvet, hooded robes, surrounded by burning candles, they are inspired by music in a minor key such as Chopin’s Nocturne in C Minor. With heavy crystal goblets of red wine at the fore, this royal court of authors quietly peruse each others work. They meticulously count the twisted and trifling phrases, transcendent trickeries of punctuation and grammar, and the “aha” plot factor (which must be missing to keep them in the game) of each book. Detailed records of each author’s achievements are recorded on papyrus pages in the Book of Absurdities, which is housed in a steel lined marble coffin, the location of which is known only by the SROATO and their Deputy Liege. Closing a meeting, this council of confusion effusively commiserates over golden plates of caviar on toast points and mushrooms stuffed with crab, aided by a voluptuous Chardonnay to end their foray into the enigmatic world of letters.

Not too long ago, I read another book in this genre of confusion, Homer and Langley by E. L. Doctorow (2009). Based on a true story of Homer and Langley Collyer in 1940s New York, Doctorow, as he is want to do in his books, including City of God (2001) and Andrew’s Brain (2014), took me through the maze of his story with purpose, albeit a miasma of disjointed words and sentences. Fortunately, his books rise above the norm, and his plots often mesmerize me into a state of altered consciousness. I could have sworn I was time traveling with Homer and Langley and Andrew, altogether comfortable experiences. Yes, Doctorow can be obscure, but predominantly he is literary stylist whose works of historical fiction mystify and intrigue my reading taste buds. 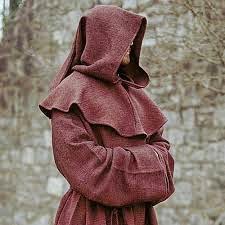 If you enjoy peculiar writing styles, brilliant stories in which it is difficult to ascertain what the author is saying along with no quotation marks or chapter numbers, lush adjectives and adverbs that twine through the corridors of your mind and lash you deeply to the story line, and endings that make you want to quickly find the nearest non-fiction book to read more about the people immortalized, by all means read Doctorow’s tomes.

And one day, one of us might catch a glimpse of one of these erudite authors cloaked in burgundy, perhaps ask them over a book signing how their stats compare to the other authors in the inner sanctum, those alien beings who challenge our thinking.
Mahala

Posted by Mahala Church at 7:00 AM