Things that inspire me to keep writing

cj Sez: There many things that inspire me to keep writing. One of the main ones is the wonderful critique group to which I belong. Each of them brings a special writing/reading strength to the process of critiquing, and I've benefited immensely from their contributions to my WIP. Ergo, I have to submit at least a few pages for every meeting. I'll admit that it's hard to find a compatible group of writers knowledgeable in the genre in which you write, but I highly recommend trying. The input can be invaluable and the camaraderie priceless.


James Lee Burke was born in 1936. (I’m not that old, but it tells me I don’t have to be a twenty- or thirty-something to succeed. Granted, I should have started earlier. sigh)  In the back of his latest novel, Wayfaring Stranger, on the “About the Author” page, I found this:  “His novel, The Lost Get-Back Boogie, was rejected 111 times over a period of nine years and, upon its publication by Louisiana State University Press, was nominated for a Pulitzer Prize.” 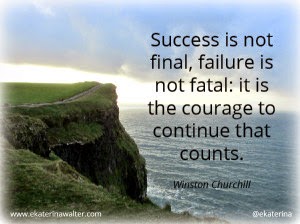 And this from author Chris Bradford: "There is no failure except in no longer trying."
You get the idea . . .  Keep on Keeping On.


Need another reason to make your writing the best it can be? (This comes from C. Hope Clark’s fantastically informative newsletter, FundsforWriters http://www.fundsforwriters.com ):

Yesterday, I got asked this question: “If you've published a novel (or, lucky you, more than one novel), could you tell me whether or not the internal dialogue is italicized?”


My answer: I’ve seen it in print both ways. When you self-publish, the choice is pretty much yours. When you have an editor and a publisher, not so much.  At one point, I read that if you use "he/she thought," you didn't italize the thoughts. But when Crimson Romance published my novel, DEADLY STAR, their editor required italics on all internal thoughts, no matter what. My guess is that “the rule” depends on who’s in charge of the final product.


It occurs to me that I tend to happily share what I can with charities during the annual season of giving—the Christmas Holidays. I drop the change in my pockets into the Salvation Army kettles. I donate food to food banks. I give toys to toy drives, usually at every place I visit that has a toy box. I send money to animal rescues like the Mobile SPCA and Good Fortune Farm Rescue ( http://goodfortunefarmrefuge.org ). I also write out checks to organizations whose pleas arrive in snail mail, but (qualifier) only to those I’ve checked out and trust to give more than five percent to the charity they are alleged to represent. But what do I do during the rest of the year? Of course, I tithe, but there are few instances, other than in November and December, where I run into a need. And that’s my problem: I seem to have to “run into” a need rather than seeking one out.


After I “ran into” McKemie Place at a Mobile fundraising event in December, I made a New Year’s resolution to seek out a charity and share what I can. I decided McKemie Place would be where I focus my year-round giving this year. McKemie Place ( www.mckemieplace.org ) is a haven for single, homeless women in the Mobile, Washington, and Baldwin counties of Alabama. I’ve been blessed to never have been homeless, though there was a time when I thought I could be.

If you’re not already doing something like this, I encourage you to search your heart; and if you’re able, look for an agency or cause that’s worthy. Local or national, whichever you prefer. I think each of us can help in some way to make another person’s life a little better.

Okay, off my soapbox, but let me know what you think about the idea. You-all guys keep on keeping on, and I'll try to do the same.