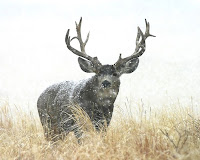 The picture from Jeff Johnston's collection is called The Apparition.
Posted by Lyrical Pens at 12:02 PM No comments:

Back in June, I whined about learning to write a short story, well . . . I have just finished what I have to call a haiku story.

Backstory: On my schedule for late September is the Writers' Police Academy in North Carolina. Lots of Ex's will be there. Ex-cops, Ex-CIA, Ex-FBI, writer Jeffery Deaver as keynote speaker, et al. And these experts will offer sessions in forensics, investigation, and firearms training. Yep, I'll be handling a Glock. Woohoo. Anyway, all of this info is a prelude to the one contest I entered.

Contest Story Requirements: A beginning, middle, and surprise ending--a regular mystery story with all the rules attendant to writing a mystery. The kicker was that the story could be no longer than 200 words, and that included the title. Plus hyphenated words counted as two words. So, in order to get the word count function to accurately report the number, you had to delete the hyphens then put them back in. Two hundred words total. Now THAT's what I call a haiku story and I loved the task! The winner gets the Academy's Golden Donut Award--named in honor of the LEOs I presume. (Not presuming that I would win. Only thinking about the donut, one of my favorite food groups.)

The neat thing is that when I finished my haiku story, I sent it to a poet friend in Georgia and his comment was that he thought I was off to a fast start to my new novel.

He may have missed the rules of the contest, but come to think of it, he just might be right.

You keep on keeping on, and I'll try to do the same.

The Jeff Johnston photo is of Jenne's Farm in New England. Looks like a perfect fall day.
Posted by Lyrical Pens at 1:55 PM No comments: