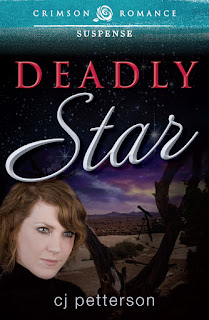 Posted by Lyrical Pens at 9:00 AM No comments:

cj sez:  I forgot to add the URL below to my post yesterday ... it's the Upcoming Release information page at the Crimson Romance website.

It's got some telling information about me.

The picture is of a feral cat I call "Nubbin." She likes to sit with the samurai protecting her back, especially after we trapped her and had her spayed.

Posted by Lyrical Pens at 12:00 PM No comments:

cj sez:  I'm in the middle of a deep learning curve on how to market DEADLY STAR. The publisher, Crimson Romance, is doing a lot already, but I need to hold up my end. So far, it's taken me two days to create a bookmark, and I'm waiting to hear from the printer if I got the format right this time. Sigh. After the panel discussion at Carolyn Haines' Daddy's Girls conference, there'll be a book signing, and since eBooks are notoriously difficult to sign (ha!), I think the bookmark will work nicely.

When I'm sure the bookmark is done correctly, I'll create a two-sided business card (whoopie). Next comes the press release, and maybe an ad in some publication because press releases don't always get published in time, or even published at all if the writer is new to the scene. I have a presence on Facebook and Goodreads, and I'm sending out notes to writing groups, family, friends, etc., etc. I'm sure there's more I'll be finding out.

Exciting stuff—I love learning new things, even if it is soooo time-consuming. It also takes me way out of my comfort zone, but I'll try to keep on keeping on. You try to do the same.

Now, here's another excerpt from the book (Protagonist Mirabel Campbell is talking with Sheriff Evan Thompson who says...)

“If a company is racing to develop a new product before someone else does, they can get pretty cutthroat. Even hire industrial spies. You might be on to something.”
She shook her head. “The genome project was set up as a multinational venture just for that reason. To make the research findings available to everyone. The idea was to level the playing field, and then there’d be no reason for profit-incentive spies.”
“Wouldn’t keep someone from trying to get a step ahead, would it? There’s money in being the first to reach the markets and where there’s money, there’s incentive.”
Scientists are too focused on their work, she thought. Too anal. But in her heart she knew there were some who might do anything to get ahead. Not for the money but for the prestige of being first. “I’d already sent my written report to the convention center. That was the reason for this quick weekend trip. Give my presentation, stop by an astronomers’ conference, then get in some R&R.”
“Okay, why are you so sure that Dan didn’t have his fingers into something?”
“If he’d been doing drug flights or smuggling or doing whatever pays beaucoup bucks, why would he still owe a ton of money to people?”
“You just made my case. Drug flights pay big bucks. Maybe he needed cash to pay off the plane. That’d be a pretty good excuse for slipping over to the dark side. Or maybe his old pickup and loan were part of a cover story so no one would think he was into that stuff.”
“You can’t believe that. Dan is as straight as they come.”
His heavy shoulders lifted slightly then sagged again. “All right, then. Back to you. You domestic CIA by any chance?”
“Are you serious? My idea of a grand adventure is trading my microscope for a telescope every once in a while so I can poke around the night skies with Ray. Until all this happened, my biggest excitement was a few days ago when I thought I spotted a new comet. I saw a bright spot and then I didn’t. Probably a blip in my contacts, but I was going to compare notes with other armchair astronomers in Vegas. So much for that idea.”

Posted by Lyrical Pens at 10:26 AM No comments:

DEADLY STAR is available for pre-order

Now, I've something more to celebrate!  DEADLY STAR is available on Amazon.com for pre-order in Kindle format.

I've been spending hours trying to put together a DEADLY STAR business card and rack card.  I'm fairly experienced at creating these things but doing it on-line in someone else's template has frustrated me. I'd get one of the sides done, then it would disappear if I tried to go back and adjust a font style or color. I can't tell you how many times I re-created the same image. I gave up last night about midnight. I'll go back at it tomorrow or the next day when I've had a chance to cool down.

On another front, Carolyn Haines invited me to participate in a "new authors panel" at her Daddy's Girls Weekend writers and readers conference in April. I'l be part of a Q and A with three other new Mobile authors. I'm looking forward to that...join us if you're able. You can check out the particulars at www.daddysgirlsweekend.com

Carolyn's latest book is THE DARKLING, written under her pseudonym of R.B. Chesterton. It's coming out in April.

I have another work-in-progress (five chapters in), and I'm excited about this one. It's a story about a newly minted private investigator who's set up shop in Mobile, Alabama. She's not only a new PI, she's a yankee new to the Gulf Coast. Lots of opportunity for conflict there...plus there's an off-screen murder.

Okay, back to the stories.

Posted by Lyrical Pens at 3:42 PM No comments: