It's official. 2009 is closing out eight hours from now. It's so nice to look back over the year and see my productivity with another book edited, manuscripts edited, several publications, some contest wins and honorable mentions, and plenty of enthusiasm left for the novel I'm about to begin editing in earnest and the new book I'm researching.

My family has had its share of hard times in 2009 with the swine flu paying a visit, and my daughter getting laid off without any notice after three years with the company and an exemplary work record. (She wasn't the only one as the company downsizes to close.) We faced the holidays on a wish and a promise. With the help of many good friends we sailed right through. My daughter used these months to work towards finishing her business degree and only has two classes left, while she researched local businesses and sought employment. We tend to be a productive family as you can tell. Not to be outdone, my granddaughter gave up her allowance and fast food with a smile; although, we found out how addicted we all are to McDonald's fries.

We face the new year full of optimism - house cleaned, Christmas wrapped up and being stored as I write this, and resolutions in hand. On the top of my list is to keep you posted weekly on my progress and the process I'm using to do my rewrite. It occurred to me recently that no matter what blog we routinely follow, what writing publication we pour through monthly, or how many writers you hear speak, there is an everlasting list of questions about the writing and editing processes. We all want to hear how someone has done or is doing it in the hopes that a drop of brilliance will spring from the golden apple and make our jobs easier. So, for those of you who are voyeurs at heart, you will get a blow by blow on what's working and what's not as I tackle my re-write.

May you have a safe New Year's Eve and a productive new year! Mahala
Posted by Lyrical Pens at 4:13 PM No comments:

Hope you all captured some wonderful memories this Christmas. My Santa did okay, I think. Of course, I haven't gotten my credit card bill yet, but I'm hopeful.

Christmas dinner at my house had to wait until the 27th, after sons and family got back from Florida, but that was okay, too. Gave me more time to create one hellacious Smorgasbord. After the traditional wrapping paper and ribbon fight (no snowballs in Mobile), I'm still finding wads of red, green and gold behind and under furniture. I expect to find more as the new year progresses (like the Easter egg hunt where there's at least one egg--hopefully plastic--that I find months later).

I've started the third edit cycle of a story tentatively titled Embedded. It's another multi-genre effort--action/adventure/mystery/woman-in-jeopardy. I guess all those genres equate to "commercial" rather than "literary," but I'm satisfied with that. I'd rather be breathless than in tears.

"Christmas Is a Season 2009" is one of those multi-genre efforts also. It's an anthology for all seasons because the stories are so varied. For example, here's the synopsis from Hobbes House, my short story submission . . .

In Hobbes House, a lonely child meets a scared fox, and a dead father's tragic secret is revealed to his angry daughter. When Merrill Cowper rents her lake house to strangers, she learns that the best Christmas gifts don't always arrived wrapped in pretty paper and tied with a bow. Sometimes, they don't even arrive on Christmas . . . or Boxing Day.

Time to close and go look for some more wadded-up wrapping paper.

Keep on keeping on folks. I'll do the same.

It is certain that each of us has a Christmas story to tell. I was fortunate to have one of mine included in the anthology "Christmas is a Season 2009." Published by Excalibur Press, edited by Linda Busby Parker, the book is a compilation of twenty-six submissions--short stories and lovely personal essays that share cherished memories of angst, tears, humor, joy, hope, faith, and love. There are no duplicate themes, and they are timeless.

As we celebrate the gift of the Christ child, I pray that peace and joy abide with you and yours at Christmastime and throughout the new year.

The signings and readings for "Christmas is a Season 2009" are moving right along.

On Nov 29, Liz McCormick, Kathleen Thompson, and Theodore Pitsios appeared at the Leeds, Alabama, Art Council. The gathering, I am told, enjoyed the presentations immensely.

On Dec 4, Bettye Forbus of the Dothan Friends of the Library invited a group to speak and coordinated the event at the Dothan, AL, Barnes and Noble. Editor Linda Busby Parker and writers Mahala Church, Dee Jordan, cj petterson, and Ted Pitsios accepted. After a few GPS miscues and some pedal-to-the-metal d 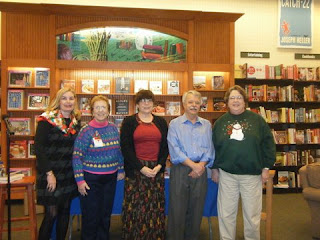 riving, we made it to Dothan from Mobile--a tad late, but in good shape. Ted's story is so funny, and to hear him read it with all that great emotion, makes it even funnier. Don't know about the others, but I had a good time. One listener enthused that she had enjoyed writing when she was younger and once hoped to study journalism. Listening to the story excerpts reminded her of that forgotten dream. She was encouraged to find a local writing group and write her own personal essay. Sounds almost like an old-fashioned tent meeting, doesn't it? (Reviving interest in writing, attracting then counseling a lost sheep.)

Page and Palette in Fairhope and Barnes and Noble in Mobile are still on the schedule (see my previous post) and now I can announce another:

Well, you keep on keeping on, folks. I will.