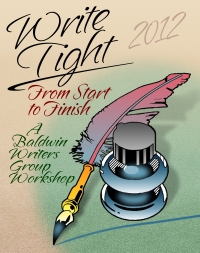 Last Saturday, I had the pleasure of speaking about editing at Baldwin Writers Group's second annual Write Tight Workshop. We had a great group of participants, and it was delightful to mingle and talk about writing with friends I hadn't seen in a while.  Candace Sams and Cynthia Eden - both well known and heavily published writers of paranormal romances and thrillers (70 books between the two of them) - presented excellent information on the writing process and developing characters along with helpful information on social networking. I plan to incorporate a number of their ideas into my writing and my social networking - Twitter is still an annoying process to me, but I am striving to make it work for me. I am pleased that Twitter is spreading the word of the MAC writing contests far and wide.  I had an entry from India this month.

The Write Tight workbook that Candace and Cynthia and I incorporated our materials into will be on Amazon in the near future and I will post that information here when that happens.  As always, Steven Moore, President of BWG organized the event seamlessly with wonderful snacks (love the cups of peanut butter!) and lunch and handouts, announcements, etc.  BWG will be selling their newest anthology in the near future and I'll keep you posted on that as well.

Three days left in the June MAC contest, so get your entries in before the deadline.

Have an enjoyable 4th of July to celebrate the best democracy in the world!

Mahala
Posted by Mahala Church at 12:48 PM No comments:


Writing is somewhat like driving a car; the gears have to be shifted now and then. Nowadays, in a car, that's done automatically, but it still happens. When writing, the point of view may change, new characters are introduced or the setting moves to another place. A much bigger shift might involve writing in a new genre.

I am a writer who does that--changes genres. Here's proof:

I spent several years writing a biography of Governor George Wallace. It started as an assignment from a publisher who went out of business. I revised it and used it as my Master's Thesis. It didn't go to waste.

The Callings, co-authored with Loretta Theriot, was set in Cameron, LA. It's the true crime story of a teenager who was convicted of matricide and sent to the Louisiana State Prison, and a Catholic priest. They grew up together: One was called by God; the other, by the devil.

My third book, also co-authored with Dr. Coffman, False Gods, was about a corrupt television evangelist who exploited everyone to reach his goals.

I shifted again for my third book to a biography entitled Quest for Forgiveness co-authored by James McEnery was about his being a child of alcoholic parents left as an orphan.

The fourth book was co-authored by David V. Wilton. It was a fictional novel about children growing up in the fifties. One becomes the first black lieutenant governor of Alabama. He has to decide whether to give up his position and come to Mobile to defend his childhood friend, a fisherman accused of murder.

I went into high gear to write a science-fiction book about aliens who bring a female reporter wreck victim back to life so she can help them come back to earth to share cures for fatal diseases.

The sci-fi book was the last one I expected to be accepted but a publisher took it in four days. Who knows what the market will bear? Maybe that's why I write about different things.

Automatic drive in cars is easier. However, I can drive a shift car. But you have more control when you shift gears--in writing, too. Also, moving from one genre to another is a challenge. Isn't that what writing is about? We sure wouldn't do it for the money.

http://www.maryspalmer.com/
Posted by Mahala Church at 2:05 PM No comments:

As I said last week, the month of May brought two distinct perspectives on Spring. Candice Conner won with a beautifully written poem about love. Candice graduated from The University of South Alabama with Honors in English and a concentration in Creative Writing. She has had articles published in The Wiregrass Living Magazine, Good Taste Magazine and Tanning Trends Magazine. She is mom to her eighteen month old daughter, Marley, who allows her to write only during naptime. I wonder if her poem is about her husband or daughter?

Like the winged seeds of dandelion fluff
I blew all my kisses away.

The wind picked them up – eddies
in the air—
and my kisses scattered. One
pirouetted in the earth, buried
itself in the warmth and waited
to flower for the rain.
Another caught on the wings
of a bluebird
and headed back
up to the sky. Another
--I saw it –
landed in you hands.

You gave it back
so I had more to give.


Next week we will have a special post from multi-faceted author, Mary Palmer. Mary will talk to us about writing in different genres.

Posted by Mahala Church at 12:32 PM No comments:

The submissions this past month brought two things into perspective, Memorial Day and spring love. Both remind us how vulnerable human relationships can be. I've selected two first place winners for May. One in gritty detail honors the men and women who challenge themselves daily to protect our precious democracy and keep America strong. The other gives us a breath of spring and a reminder of the innocence of human love.

Our first winner is Mary Ivey. Mary's work is no stranger to those of you who follow our blog. She has placed in several of my contests. An artist, a poet, a writer of science fiction, Mary shows other talents in this month's winning piece.
Mary remind us that life is a valuable gift that should not be wasted but too often is in the name of the greater good, which no one in history has been able to fully explain. Every country has its own definition. It's a reminder that those defending our freedoms are still very human indeed.

It is quiet now; the guns have ceased their booming. Through the pouring rain, I see figures moving, checking bodies to see if any still live. Today we were victorious; God only knows what tomorrow will bring.

I huddle into my slicker, trying to find some inner place where I'll be able to shut out the horrors of the war.

I imagine myself back on the farm. The sun is shining. My mother's flower garden by the front porch is just starting to bloom. My sister Amelia is playing with a friend from a neighboring house. I can smell pies baking—

My Captain's voice cuts through my reverie like a knife. I get to my feet and follow him. Impressions left in the earth by his boots fill with rainwater, dyed red.

May God bless those who save the rest of us. 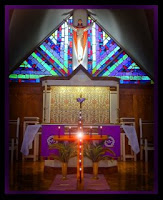 Posted by Mahala Church at 12:54 PM No comments: