Spring is here a bit early this year, even for the Deep South. Temps in Mobile are already in the high seventies. Flowers are bursting open and the sound of raking and mowing fill the air. I love Spring when the earth brags about it's accomplishments and showers us with the rich smells of turned earth for planting and flowers galore. It spurs me on to new heights and to that end I'm writing up a storm and trying new ideas once again. The swirl of words on the page - whether hand written or typed - are so full of wonderful possibilities, and although not always as prosaic as my critique group would wish, I find it an exciting exercise of my brain matter to seek and find a new way of saying the same old thing.

Caroline, the protagonist of my novel,A Few Degrees Off Center,has given me such an opportunity for creativity. A twelve-year-old girl with a good, old fashioned fifties Southern accent and flair for words, she has had a ball filling my mind with new ways to describe a scene or express her sense of reality. I will miss that once she is shelved, but for now, I'm continuing to cull the words and scenes to create a worthy read for future audiences and thanks to my critique buddies, Wanda, Nolan, and Marilyn, the scenes are addressing those needs.

As for other fun activities, I had the pleasure of working with a creative writing class of high school students at Faith Academy recently and what fun we had discussing how to plot a short story. Bright and articulate, the students posed appropriate questions and kept me on my toes. Good luck to Tyler with all his enthusiasm, Haley and Josh slogging through the middle of their stories (hard for any writer) and Eric who was kind enough to staple my handouts. I will be starting a summer salon for high school writers in the near future, so to you and any of your friends, let me know if you will be interested in joining the creative process for six weeks or so. Mrs. Jester has my e-mail address if you have questions. We will have a good time growing in the creative process.

Oh, by the way, I've gotten so side-tracked on researching my new book, I put aside the idea of writing two hundred short stories and instead am focusing on the continuous short story collection for the book. As with most writers, I chastised myself for giving up what seemed like a good and organized idea, but I decided I'm going to do what my writing angel tells me to do since it always seems to be the right idea. In addition the characters in my new novel are to the point of shouting at me now, so I'm collecting background info for them as well. Gotta do what I gotta do.

For those of you still shoveling snow, spring is on its way! Mahala
Posted by Mahala Church at 1:44 PM No comments:

It's kind of interesting how this works: I party through spring--making sure I celebrate all the famous people's birthdays (including mine-Hoo hah), Valentine's Day, Mardi Gras, St. Patrick's Day--and then here comes April Fool, and a couple of weeks later, I have pay the piper, AKA the tax man. This week, I'm struggling to gather up all the paperwork I need for the CPA to work his magic, and it occurs to me. It'd be a whole lot less stressful at this time if I would just keep everything together throughout the year. Disclaimer: I do try, but each year, my good intentions seem to peter out along about the lazy, hazy days of summer. Perhaps I need a bigger tickler file. I might even use it if it's placed beside the one where I keep my story ideas.

Learned a lot at the recent YA writers' retreat in Northport, AL. Ginger Rue ("Brand New Emily" and "Jump") was the facilitator and the relaxed setting made for a wonderful day. Next on my to-do list is Carolyn Haines' writers and readers fun weekend in Ocean Springs, MS in early March. Carolyn writes a popular mystery series with the word "bones" in the titles and a very likeable character named Sarah Booth Delaney who is pestered by a ghost.

Well, I'm officially juiced: I received news that both of my short, short story submissions, one fiction and one non-fiction, were accepted for publication in the April issue of the University of South Alabama's literary anthology magazine, THE ORACLE.

The picture of Mardi Gras beads is by Jeff Johnston.
Posted by Lyrical Pens at 5:14 PM No comments: 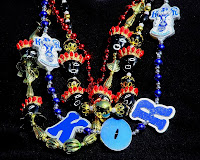 I feel as though I haven't blogged in for-ev-er. Just so you know, it hasn't just been the blog I ignored . . . I had a good friend E-mail me and wonder where I was. Been busy with family stuff is the only excuse I can give, hoping no one can argue with that.

For all you snow-bound readers, I'm happy to report that several squadrons of robins have made re-fueling stops on the grassy plains of Mobile Regional Airport. Can Spring be far behind? Probably yes, because I forecast that Groundhog Phil is likely to see his shadow tomorrow if not from the sun, than from all that bright, white snow on the ground in PA.

Mobile is also the source for another early arrival. Fat Tuesday for the year 2011 doesn't officially arrive until March 8, but the celebrations have started where I live. The Wednesday that marks the beginning of Lent may not be a great big deal in the North, but the heavy Spanish and French ancestral influences along the Gulf Coast make Mardi Gras an important holiday--one that warrants not just ashes on the forehead, but days off work and school. Mobile, New Orleans, and Biloxi, Mississippi, all claim to be "THE" first city in the New World to celebrate Mardi Gras. New Orleans probably has the most well-known and maybe the largest, but as to who was first, history and Wikipedia are a little vague on that. Like Christmas, this religious observance has been transformed into an extended major secular event for these cities--the parades start early and, like the Energizer bunny, keep on going and going and going. Knights, Krewes, Kings, Maids, Mullets, Mystics, and Orders try to outdo each other in revelry and moonpie tossing. The Mobile area has already had one parade, and the next one is Feb. 5--the Krewe De La Dauphine Parade on Dauphin Island.

In lieu of hoping to catch one of those extravagant beaded necklaces or a sweetly delicious moonpie on Feb 5, I'll be at a writers' retreat in Northport, Alabama, just north of Tuscaloosa, home of the University of Alabama. (Disclaimer: Disregarding the intense rivalry that exists between the two institutions, especially in football, and at the risk of getting mauled when I next meet up with my son's in-laws, I don't favor either Alabama or Auburn. I'm a baseball fan, specifically for whatever team needs my support at the time.) The Breeze Hill Retreat is short and small--one day, twelve writers--but intense. (Harumph, sounds like me.) I'm hoping to come away with a better idea of how to write for "young adults" since that is my next/ongoing work in process. I'm also hoping the enthusiasm of my fellow retreaters will rub off on me. It's the first of two Gulf Coast writerly events I've scheduled to attend this year. I also have eleven new books to read, "she says optimistically."

A thunderstorm is coming in, so I think I'd better unplug this lightning rod for now. You keep on keeping on and I'll try to do the same.

The Jeff Johnston picture is a trophy necklace from the Knights of Revelry. Their 2011 parade takes place on Fat Tuesday (Mardi Gras), March 8.

Late update, Feb 2: According to his "handlers," the Pennsylvania prognosticator Phurry Phil predicted an early spring. My foot! He should have turned around; the sun was shining in his face.
Posted by Lyrical Pens at 7:14 PM No comments: