What You Need Most: Installment 4

Sorry to keep you in suspense. Here is more of Tracy's lovely story, a story that reminds us how hard it can sometimes be to bring joy into the Christmas Holidays.

What You Need Most
by Tracy Hurley 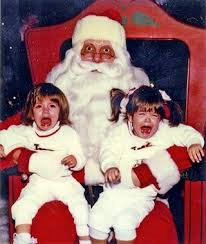 When Marshall got home from class that afternoon, he was met by the delicious and unaccustomed aroma of dinner cooking. Sarah, his youngest, had drawn the "Thanksgiving with Dad" straw.

"You didn't have to cook," he said, tousling his grandson's white-blond hair. "I was going to take you out."

Sarah rolled her eyes. "Clearly, it's been awhile since you've dined out with four- and six-year old wigglybutts."

Jayden, thumb stuck firmly in his mouth, wiggled his bottom too.

"You're all wigglybutts," Marshall said, winking at the boys. "And when is Daddy Wigglybutts going to arrive?"

The boys giggled, but Sarah frowned. "He called. He can't get away. Something about a difficult client. He's going to the office on Friday."

"Then don't bother cooking Thanksgiving dinner," Marshall said, taking a slice of meatloaf. "While everyone else is dining at home, the Wigglybutt family will have the whole restaurant to ourselves."

"Da-ad," Sarah moaned. "The turkey's already defrosting, and I have pies in the oven. Besides I like to cook, and you'll have lots of leftovers after we're gone."

Marshall had taken a bite of mashed potatoes when Preston said, "Where's Buster, Grampa? I wanna play with him."

Marshall choked, but managed to sputter, "Sorry," through a coughing spasm. He pushed away from the table and headed for the kitchen, his eyes tearing up and still hacking into his napkin. He stood at the sink and sipped water while he caught his breath.

Although she spoke softly, he heard Sarah say, "Remember, I told you that Buster is up in heaven playing ball with Gramma. Talking about both of them makes Grampa sad, so let's not say anything else."

"Why does it make him sad?" Preston asked.

Because Grampa misses them."

"Can we come to live with Grampa? He wouldn't be sad then."

"No, but Daddy would be sad if we left him alone."

"Maybe Grampa can come live with us."

Marshall set his glass in the sink. He could sell the house and move closer to Sarah and the kids. He tapped the dog tags he'd hung from the hook that used to hold Elaine's spider plant. They spun, glistening in the fading November twilight. He' had spread Buster's ashes in Elaine's flowerbed just beyond the window. How could he leave Buster? How could he leave Elaine?

Fortunately, no one mentioned him moving again. Sarah cooked up a Thanksgiving dinner that would have made Elaine proud. While the kids were napping, Marshall took a cup of coffee and a slice of pecan pie out back. The barely-used, zero gravity chairs were put up for the winter. He sank into his old aluminum chair.

When he'd finished the pie, he pulled the Honey-Do list from his pocket and penciled out the next-to-the-last item, re-web chair. After his shift at the mall, he could cross out the last item on the list - Santa School.
*
On Sunday morning Marshall took Sarah and the kids to the airport before heading to the Remington Plaza Mall. He changed in the employee lounge and waited until Santa Carlos finished his shift. Marshall's stomach fluttered as he walked through Santa Land, a large expanse of fake snow with robotic, toy-making elves and animated snowmen singing Christmas songs. He sat in the large gold throne and pasted a smile on his face.

By the time the giant Santa Land clock struck his shifts end at 12:55, Santa Marshall had been smacked, pinched, puked on, sneezed at, peed on, and told he was "a big old doo-doo head." His head pounded and his cheeks hurt from forced smiling. Santa Ralph had told them seventy-five percent of children under the age of ten were terrified of Santa. By Marshall's reckoning, it was closer to ninety-eight. And those over ten didn't believe in Santa anymore, so they came for the fun of trying to make him break character. A couple almost succeeded.

When Santa Marshall finally trudged back to the employee lounge, he found Santa Ralph by the employee refrigerator eating from a Tupperware container. He took a big forkful and asked, "How did it go?"

Marshall sighed. "It wasn't what I expected." He pulled off the heavy black boots.

"Christmas isn't what it used to be. If the kids weren't asking for Xboxes or iPhones, they wanted hang gliders and ATV's and jet skis. What happened to baseball gloves and bicycles and pogo sticks?" Marshall slipped on his boat shoes. 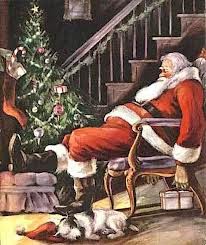 "Mall duty is the toughest. In this economy, you're lucky the kids weren't asking for jobs for their daddies, winter boots for their sister or brother, or a sack of groceries. Playing a mall Santa isn't for everyone. My advice: find yourself a nice department store gig. Maybe a holiday parade. Office parties - now those are fun!"

"Thanks for the tip." Marshall was too tired to change into his street clothes, so he gathered up his coat and hat and headed for the door.

"Don't forget your diploma." Santa Ralph handed him a red and green certificate. "I have to go cover Santa Brad's shift."

Join me next Monday for the unexpected conclusion of "What You Need Most".   Mahala
Posted by Mahala Church at 11:09 AM

Email ThisBlogThis!Share to TwitterShare to FacebookShare to Pinterest
Labels: " Christmas is a Season 2009, Tracy Hurley, What You Need the Most