cj Sez: Hope your celebrations ushering in the 2018 New Year were safe, warm, and happy! 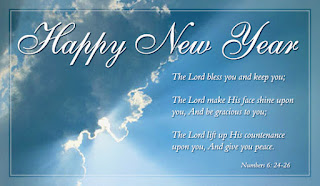 The unusual cold weather in Mobile kept many of the local exuberant, gun-shooting celebrants indoors so I actually got to sleep before 2 a.m. The extra sleep was appreciated because I was entertaining guests for lunch on New Year’s Day, complete with the Southern tradition of making a blackeyed peas dish and cornbread. Both turned out quite tasty, if I do say so myself. Hopefully, this will start me off on the right foot for 2018.

Be it hereby resolved: This year I resolve to not make any resolutions that I historically never keep, except this one: 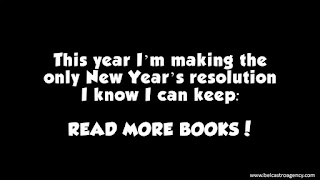 Instead, I am setting measurable goals.
1:  Make four visits to the Wellness Center each week instead of three.
2:  Write three short stories instead of two.
3:  Revise the most aggravating work-in-progress I have ever created and get it submitted.
4:  Restart writing WIP number two.
5:  Start two more novels … or maybe novellas.

That makes five goals, but wait, there’s more! (My new favorite, inane expression.) There’s always more; I just don’t know what it is yet. I do know that I’m not planning on attending any out-of-town conferences this year. Those I’ll save until I have something new to promote.

On the home front: Over the fall season, a tribe of feral cats arrived on my patio. 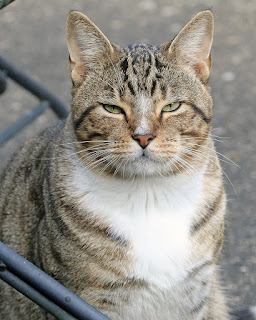 The latest female is a beautiful all-black kitty about eight months old named Shadow—she wasn’t part of the original group. She crept in later and fell in love with Buster, the gentle giant. He is eleven pounds of feline muscle and is one of the cats featured in the Familiar Legacy post.

The other newer arrivals are all Shadow suitors: Stubby, an all-black Manx, Brindle, and the puma-like BMC (Butterscotch, Marmalade, Creamsicle). He should probably be called BMOC, because he is the Big Man on Campus, bigger and fuzzier than Buster. He will let me pet him, so perhaps I can trap him out also. I’m not sure how I got to be the crazy-cat-lady, but here I am.

I wrote a post about the tribe for the Familiar Legacy Mystery series blog. It's scheduled to run on January 16. Please stop by, and be sure to visit frequently. They share wonderful posts by other authors.
https://familiarlegacyblog.wordpress.com/

And . . . . next Saturday, the first Mardi Gras parade of 2018 winds its way down the main drag of Dauphin Island. In other places, Mardi Gras, or Fat Tuesday, is a day—February 13 this year to be exact. In Mobile, it’s a season. 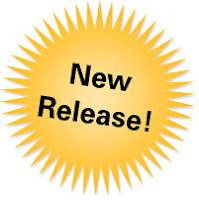 New releases to share with you: Small Town Trouble … by Laura Benedict, the 5th book in the Trouble Legacy Series. 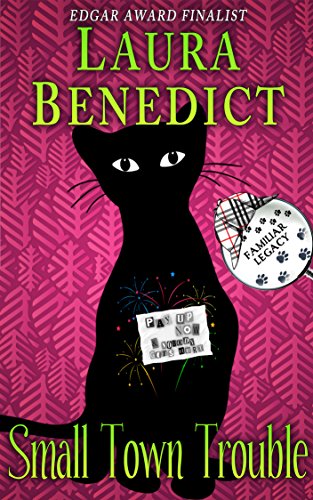 Amazon blurb: SUMMER SECRETS ...KIDNAPPING AND MURDER. Erin Walsh arrives home to tiny New Belford, Kentucky, from college only to clash with her young stepmother, Shelby Rae. When Shelby Rae is kidnapped and a dear friend of the family is murdered, Erin discovers that both victims had secrets connected to the violent death of her mother seven years earlier. In a small town the pool of suspects is limited, but it also means the danger to Erin’s own life is deathly close

Enter Trouble, the wise and wily black cat detective. His paws have barely landed in the bluegrass when he realizes Erin is about to put herself in danger. Can he lead Erin to the truth before she becomes a victim herself?

Twelve Angry Librarians … The paperback version of book 8 (of 9) in Cat in the Stacks Mystery Series, by Miranda James, is now available.

Amazon blurb:  The author of the New York Times bestselling Cat in the Stacks series is back with more Southern charm and beguiling mystery as Charlie Harris and his cat Diesel must find a killer in a room full of librarians. 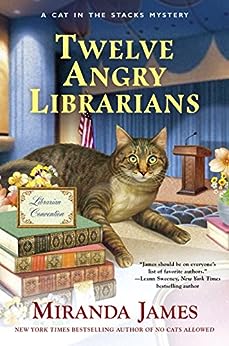 Charlie is stressed out. The Southern Academic Libraries Association is holding this year’s annual meeting at Athena College. Since Charlie is the interim library director, he must deliver the welcome speech to all the visiting librarians. And as if that weren’t bad enough, the keynote address will be delivered by Gavin, Charlie’s old nemesis from library school.
When Gavin drops dead, no one seems too upset. But Charlie, who was seen having a heated argument with Gavin the day before, has jumped to the top of the suspect list. Now Charlie and Diesel must check out every clue to refine their search for the real killer among them before the next book Charlie reads comes from a prison library.

Okay, that’s all for today. You-all guys keep on keeping on, and I’ll try to do the same. Be sure and let me know if you want to do a guest post for a new release. I’d be happy to host you, but just remember that I’m a PG-13 site.