What attracts you to a book?

cj Sez: I was recently privileged to speak to the Mobile Writers Guild about how to “Give Your Story Its Best Start and Best Shot” at attracting readers. As a reader, what attracts you to a book?
Whether it’s on the library or bookstore shelf or on an on-line book seller, the first thing you do is go the genre section or favorite author you’re interested in, and chances are you check out the title and then the cover.

Titles and cover art, even the quality of the paper may mean something to readers; i.e., is the writing the same quality as the cover? The title and the cover also introduce the tone of the story and the author’s voice. These two items can be your best start and best shot at gaining a reader’s attention. That all-important first line, first page, and first chapter don’t enter the purchase equation until after the reader picks up the book.

Quoting a recent Facebook post commenting on an author’s cover reveal: “Congrats. Awesome title and cover. Can’t wait to read.”  I had the same reaction when the cover of Choosing Carter was revealed.

Conversely, another post read: “I love cover art that looks professionally done. I am not attracted by a book with a cover that looks amateurish….”

Granted, traditionally published authors, of which I am one, don’t usually have the control over the cover art that self-published authors do. The publisher may or may not work with the author to develop the cover art. But for the self-published writers who do have control over their cover art, if you’re not an illustrator or art design expert, consider hiring the cover done … and seek input from other authors for your title.

It’s Marketing 101, and why there is such a to-do over cover reveals. Just a thought.
***
Congratulations are in order for Stephen Mack Jones, winner of IACW/NA’s Hammett Prize.

The Hammett Prize for Crime Writers is bestowed each year by The International Association of Crime Writers (North American Branch) “for a work of literary excellence in the field of crime writing by a U.S. or Canadian author.”

***
This busy man (with the dual jobs of corporate 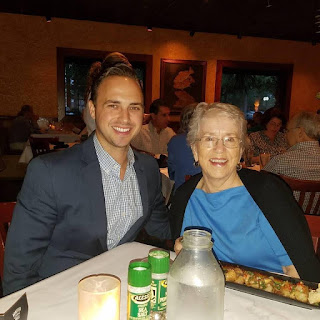 counsel and buyer for a local business) invited me out for appetizers one evening last week. Grandson Jeff and I are at Bonefish Grill. Do I look happy or what (that is not a question).

Stop by Amazon and pick up copies of DEADLY STAR and CHOOSING CARTER. Fast, exciting reads and a Christmas gift that keeps on giving. (A hint in case you have only two more paydays until Christmas.)

Send me an eMail that you’ve left a new review for me to read (Goodreads, Amazon, wherever and good, bad, or simply “I read it.”) and I’ll put your name in the raffle hat. The random name I draw on December 6 will receive a nice gift bag of goodies. I’ll post it on my Facebook page, so be sure to stop by.