cj Sez: Authors often include bits and pieces of personal experiences in their stories. Let me tell you a little backstory about my first-person research for:

Way back when I was a younger woman, I spent five-and-a-half days on an Outward Bound, white-water rafting trip down one of the best, dam-free rivers in the United States—the Yampa River.

The Yampa is the only free-flowing tributary in the whole Colorado River System. At 250-miles long, the river—a lazy float trip in the summer months—surges to life when spring melts the mountain snows and rushes boaters through awesome, sandstone canyons in Dinosaur National Monument. 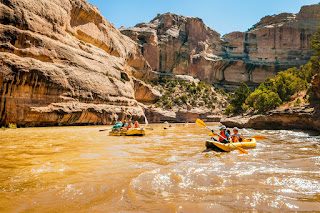 There were four huge, silver rafts in our Outward Bound convoy, each carried eight to ten people, and there was a flotilla of kayakers who ran the biggest rapids ahead of the rafts and waited downstream, ready to pick up anyone who fell overboard.

I went alone, in May, during the snowmelt, didn’t know anyone who was going to be there, had never rafted before, and I didn’t know how to swim. We entered the river in Colorado, slept in sleeping bags on the shores, and ended our adventure seventy-five miles later in Utah.

The following year, I volunteered to do a Jeep Jamboree off-road adventure on the Rubicon Trail in the Sierra Nevada Mountain range and write about it for the company newspaper. The Rubicon Trail is classified as a 10 on a scale of 1 to 10 in difficulty for off-road enthusiasts. I joined two professional writers in a Jeep Wrangler that, like many of the Wranglers on the trail, had had its doors and top removed and a skid plate welded to the undercarriage to protect the engine from boulders.

I was the only novice driver/writer in that Jeep, and sat, mouth agape, when the driver ahead of us miscalculated and rolled off the one-lane trail. We waited until Jamboree trail guides rolled him upright and sent him on his way again. We drove onto the Rubicon from Georgetown, California, slept in sleeping bags under pup tents, and drove off the trail above Lake Tahoe. After one night of bathing in an icy mountain stream and sleeping on a deflated air mattress atop a granite boulder, I was extremely happy to spend the next night soaking in a hot tub in a hotel.

Both of those trips were the inspirations for the settings in CHOOSING CARTER and a personal essay, “Don’t Ride the Clutch,” published in CUP OF COMFORT FOR DIVORCED WOMEN (Adams Media, 2008).

The only reason I can give for daring to seek out the adventures is, I was in the throes of a midlife crisis and wanted to challenge myself…to do more than leave dimples in the surface of my life like a water spider. And who knew they would make great fodder for stories.

To read more about the exquisite mountain settings I experienced, eBook copies of both books are available on Amazon. They're free on Kindle Unlimited at the time of this post. An autographed copy of the CHOOSING CARTER paperback can be had by contacting The Haunted Bookshop. A link is provided below.

cj
Free on Kindle Unlimited at the time of this post:

5-Star Review: Mirabel Campbell must learn how to stay alive in a covert world of political intrigue where the unexpected is the norm, and she’s not the kind of woman who’ll wait for anyone, including her CIA ex-husband whom she still loves, to make her decisions. She made a promise to a murdered friend to find out what’s so special about a mysterious point of light in the sky, and she intends to keep that promise.

Little note: Print copies of Choosing Carter and Deadly Star are becoming scarce as Simon&Schuster winds down their support of the Crimson Romance imprint. You can, however, support an indie book store and order an autographed copy of my books here: The Haunted Bookshop  Angela Trigg, the awesome owner and a RITA Award-winning author in her own right (writing as Angela Quarles) will be happy to ship you the book(s) of your choice.
Drop me a note to sign up for my quarterly newsletter: cjpetterson@gmail.com
cjpetterson/author on Facebook
Amazon Central Author Page =  https://amzn.to/2v6SrAj
Simon&Schuster Author Page = https://bit.ly/2uo1M0Z
Posted by Lyrical Pens at 4:00 AM