At the same time that I was posting that no one entered the September Stuff and Nonsense Contest, D. W. was emailing me his entries. Given that he sent two, and both make their points well, and given that he is the only one who submitted for the month of September, we are posting both of his pieces. Today is the first and on Friday, the second will be posted. Welcome to D. W. Hartford, our guest blogger for the day. Thank you for reminding me that a contest isn't over until the 12:00 a.m. on the last day. 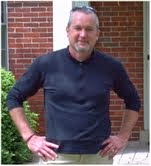 D.W. lives and works in Biloxi, MS.  A lifelong educator with a variety of academic publications to his credit, he taught Philosophy to college students for nearly a decade; for the past five years he has served as Education Consultant to a number of not-for-profit educational organizations.  In the same time, he has directed most of his creative energies towards the writing of short stories, plays, and dialogues— most with an undeniable educational bent.  His latest project is a book-length account of his recent travels through the U.S.A. with the working title, In and Out of Distance:  An Educator’s 6-month Journey through the ‘Real World.
Labor Day:  Too Much Work
D.W. Hartford
n Labor Day morning, 10:30 a.m. to be precise, it seemed a good time to have “the talk,” maybe even a grown-up time.
For the first hour, everything went, well, it was hardly like working. The sun beamed, blue skies smiled, white clouds winked, surf chortled, winds caressed. With the hatch on the Jeep raised, sitting closely, we began our relationship work in shade-covered steps.
And then?
Earlier that morning, I’d envisioned success. The cooler full of food and drink, the Frisbee, the towels and beach chairs, her favorite shirt; all of this attested to success. Putting vodka in the clever disguise of my travel-mug did so too; surely just as much as my confidently scribbled notes laying out a reformed understanding of Saturday night’s fight, along with several clever steps towards reconciliation.  It does take work to be a grown-up, after all.
And then?
The next hour brought sharp winds, merciless heat, sullen skies. The surf mocked, as did she. Still sitting, I protested. Now standing, she glared as hot as the sun.
And then?
Still more boats pulled up then pulled away. The minutes labored over each second. That sun, oh, that horrid sun!  I wiped the sweat from my forehead. She didn’t move an inch.
And then?
I protested and I pleaded. “But I’ve been honest!”  “No, I do not need to be in control!”  “You haven’t even let me finish!”  “My feelings go beyond all that!”
And then?
Two empty Tupperware containers, a book of poems, three wrinkled sheets of paper (each bearing a story I’d shared), three dvd cases (my favorite comedies), and me. In the front seat of the car.
And then?
I resolved that doing work on Labor Day is way too much work, indeed—especially when it’s grown-up work.

It would really be helpful if you would send D. W. your comments about the work. As writers, we all welcome critiques so we can learn and grow. Let him know if you understood the theme of the story and what worked especially well in it.

And if you have any prompt ideas for November, send them along too.

Posted by Mahala Church at 2:40 PM