My friend Fen and his friend, Elmore Leonard

cj Sez: When I worked in Chrysler’s Employee Communications Department, I met an ad man who was an honest-to-gosh World War II American hero (served with General George S. Patton in France and Germany). Fen became a dear, dear friend, and we stayed in close touch until his death at age 97 this past January. It was Fenton Ludtke who introduced me to Elmore Leonard’s writing discipline.
Fen had worked with Elmore Leonard at an ad agency for a time and had great admiration for his writing and his discipline, as I came to appreciate also. But I appreciated Fen most of all: a gentle man with great wit, sensitivity, and quiet earnestness who unflaggingly supported and encouraged my feeble first attempts at writing a novel.
Back to Elmore Leonard: I wish I could have begged, borrowed, or stolen some of the man’s discipline for writing. What started as necessity for him (his job required it) turned into habit when he became an established writer.

“To support his family, he worked as a copywriter at an ad agency, where he developed his aversion to adverbs, and also his knack for brief, punched-up prose. He began a habit of waking at five a.m. and immediately starting to write -- not even putting the water on for coffee until he had something down on paper -- then going to work at the office, first in advertising and later writing educational films for the Encyclopedia Britannica.”

It used to be that I worked better when I had a short-term deadline, as was always the case in my job in Employee Communications. After I retired and began to write novels and short stories, I thought if I gave myself a deadline to meet, I’d knock out stories in no time flat.
Found out that’s not true. I manage to bury any self-imposed deadline under weeks of procrastination that I call “research.” (Elmore Leonard paid others to do his research.) It seems that the more I research, the less creativity I have. I get lost among the fascinating facts in those research rabbit holes, and my story suffers. I am learning a lot of stuff, though.
Unlike Mr. Leonard, I’m not usually such an early morning riser after I retired. Six-thirty is about all I can manage and still stay awake the whole day. However, occasionally, as was the case a couple of mornings ago, at four a.m., I will make a note about one of the WIPs I have in my computer and promptly crawl back into bed. I sometimes get good ideas just before I fall asleep or when I’m dreaming. That’s why I keep a pad of paper and a pencil on the table next to the bed. Some ideas I use, others don’t turn out to be the good idea I thought they were. 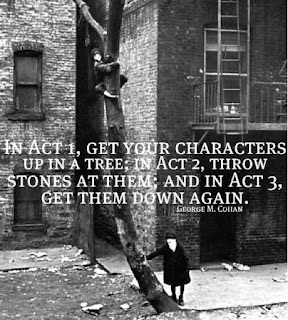 I’m not a believer in writer’s block. When I get stuck, I think I just need to take a break from my WiP, and I will read some other author’s fine work. It doesn’t make a difference the genre. It might even be a book of poetry.
I find that an escape into someone else’s work almost always provides the nudge I need to send one of my characters up another proverbial tree so I can throw rocks at her in the middle of the manuscript.
How about you? When do you get your best ideas? How do you conquer the blank page in front of you?
§§
Writerly/Readerly quote:
“My alma mater was books, a good library…. I could spend the rest of my life reading, just satisfying my curiosity.” - Malcolm X
§§
And now a few words from my sponsor: 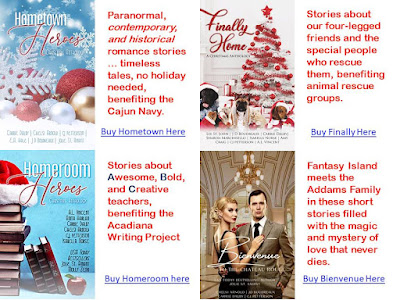 Someone said, it’s never too soon to start your Christmas shopping. (I think it was one of my kids.)
These anthologies make wonderful gifts, filled with timeless stories that are wonderful reads all year long. Bonus points: Part of the proceeds of three of them benefits charities. 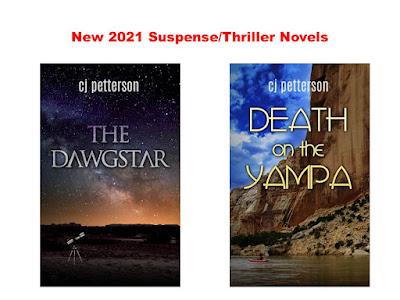 THE DAWGSTAR is available as an eBook from the etailers listed here... https://books2read.com/u/3LRRG5
and as a paperback  Amazon Buy Now
DEATH ON THE YAMPA is available as an eBook from multiple etailers...  https://books2read.com/u/bxe1AP
as a paperback  Buy Paperback Yampa
and as a #SCREAM, series phone app. There are a lot of authors and their mystery/suspense stories available on #SCREAM. All you do is load up the app and search for the author’s name.
§§
Draft2Digital tells me that you can ask your local library to order my eBooks for you. You’ll need to give them the ISBN number of the title you want to borrow. I’ve listed mine below.
THE DAWGSTAR … ISBN 978-17369146-0-1
DEATH ON THE YAMPA … ISBN 978-1-7369146-1-8
§§
That’s it for today’s post. You-all guys keep on keeping on, and I’ll try to do the same.
cj
P.S. TO ORDER any book of your choice on-line and support an indie bookstore, contact The Haunted Bookshop here: https://www.thehauntedbookshopmobile.com/contact-us
If you’d like me to autograph or personalize one of my books for you, be sure to tell them, and I’ll run by the shop.
The Haunted Bookshop has re-opened to limited hours (and they have an awesome bookstore kitty, Mr. Bingley), so if you’re in the Mobile area, you can stop and shop, too.
➜ Follow me . . .
➜ on Amazon:    Amazon Central Author Page
➜ on Facebook:  cjpettersonAuthor on Facebook
➜ on BookBub:   https://www.bookbub.com/authors/cj-petterson
➜ on Goodreads: https://bit.ly/3fcN3h6
Posted by Lyrical Pens at 4:00 AM