Which would you rather do first…read the book or see the movie?

cj Sez:  Here are two authors who have both formats for you. In case you don’t remember, on Oct 3, I posted a Lyrical Pens 4+star review of #1 New York Times bestselling author Lisa Gardner’s novel BEFORE SHE DISAPPEARED. 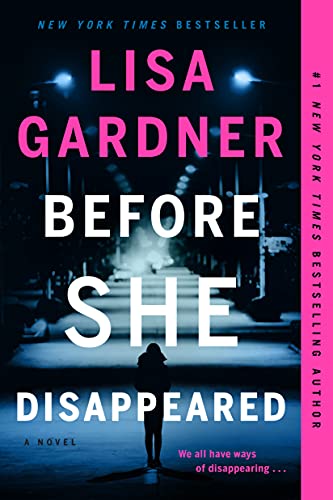 The novel is peopled with flesh-and-blood characters you want to love, want to hate, and want to win. And her settings? You will know where you are, and you will fear who lurks in the shadows.
Seems some movie folk liked it, too. From a press release:
“Entertainment One has acquired the rights to bestselling author Lisa Gardner’s novel Before She Disappeared with Oscar winner Hillary Swank set to star and executive produce via her Film Bandits banner.”
Congratulations Lisa Gardner!
§§
Be sure to watch for a guest post by author Barbara Hinske about her soon-to-be-released THE UNEXPECTED PATH, the second in the Guiding Emily series featuring her blind protagonist,  Emily Main.

I’ll announce the date of the mid-week post on Facebook soon.  In the meantime, the Kindle version of THE UNEXPECTED PATH is available for pre-order for 99 cents.

P.S. Barbara is the author of the novel THE CHRISTMAS CLUB, now on the Hallmark Channel.
§§
New to my TBR books:
I went to the library on Saturday and picked up THE WORLD PLAYED CHESS by Robert Dugoni…hailed by one reader as “A fearless and sensitive coming-of-age story.” Since it’s a hold-in-my-hand-hardcover book with a time limit on it, I’ll start it next week.
§§
My short story, “Once in a Blue Moon,” is one of 18 short stories and poems in the anthology HALLOWEEN PIECES, the fourth anthology from the Mobile Writers Guild.
Click here to watch as I read an excerpt, and watch for the cameo by the cat.

As of the time of this post, HALLOWEEN PIECES is priced at $1.99 and free on Kindle Unlimited.

The STORMY PIECES anthology launches November 3 and is now available for preorder.
From the Amazon blurb:
“In this fifth installment of the Mobile Writers Guild Pieces anthology series, our members give you their unique perspectives in the form of short stories, poems, and one play.”

Look for my short story, “Ida, Fate, and Mister Leon.”

My inspiration for the storm in the story came from a NOAA report… “November 10, 2009: The beginning of the extratropical cyclone that would become known as "Nor'Ida", which formed from the remnants of Hurricane Ida made landfall in Dauphin Island, Alabama and later in mainland Alabama before moving into Florida.”

§§
SALE: The ebooks of DEATH ON THE YAMPA and THE DAWGSTAR are now on sale @ only $1.99 each. Fast-paced and exciting suspense, with a touch of Jane Bond romance.

P.S. TO ORDER a book by any author on-line and support an indie bookstore, contact The Haunted Bookshop here: https://www.thehauntedbookshopmobile.com/contact-us
If you’d like me to autograph or personalize one of my stories for you, be sure to tell them, and I’ll run by the shop.
➜ Follow me . . .
➜ on Amazon:    Amazon Central Author Page
➜ on Facebook:  cjpettersonAuthor on Facebook
➜ on BookBub:   https://www.bookbub.com/authors/cj-petterson
➜ on Goodreads: https://bit.ly/3fcN3h6
Posted by Lyrical Pens at 4:00 AM