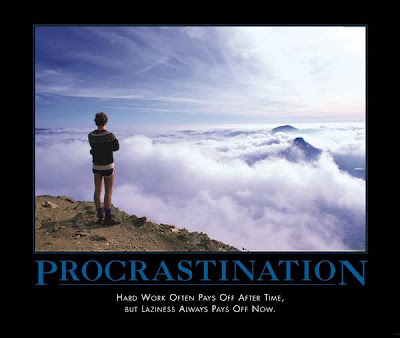 I was going to write this Monday, but I got sidetracked . . .

I have developed the art of procrastination into an art form. (Ask anyone who knows me).

I can look like I'm working on something, to the point that casual onlookers could testify in court that I was on task and not fear charges of perjury, and yet not actually get anything done.

I can spend hours with the appearance of someone deep, deep at work, right down to sweat-tinged brow and bloodshot eyes and be no closer to completion than when I started.

I can click between my current WNIP (work-not-in-progress) and Spider solitaire so fast that it can't be registered by the human eye, in case someone is checking up on me. 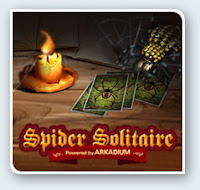 It's a gift and a curse. On the one hand, I can sometimes wheedle out of doing dishes or going grocery shopping because I am "writing."

On the other hand, I can pinch a deadline so tight it bites me back. Take this past weekend for example. I spent three days in writing hell. And I have no one to blame but (mostly) myself.

August 1st was D-day for me, as in several writing Deadlines were due.

I had three novel scenes to submit for a mystery writing retreat that I'm attending in September with CJ: the opening scene, a scene that introduces a main character, and another complete scene from my WIP. Since this is a new project, I had to start from scratch.

August 1st was also the deadline to submit to the anthology Christmas is a Season! 2009 (Linda Busby Parker's Excalibur Press). I had been working on a story but had set it aside to do the retreat pieces. 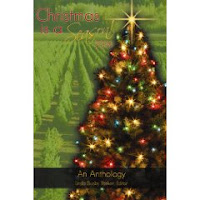 Let me interrupt myself here to say that the way I deal with stress when something has to be done is to do . . . nothing. And the corollary is also true: the more that needs to be done the less I do. Again, this is true—ask anyone who knows me. These deadlines had me in total paralysis.

That's not to say I didn't look like I was working. But let me illustrate my "Writing Process":

I sit facing a blank Word doc, and contemplating what to write for the scene sample for the Seascape retreat. After a couple of games of Spider, I type:

Aggie did not feel welcome.

Why not, I wonder? I play a game of Spider. I realize she doesn't feel welcome because of the doormat. It's not a welcoming doormat. So? What kind of doormat is unwelcoming. Play two games of Spider because I win the first one. Launch Internet Explore, do a Google search, and spend an hour looking at different types of doormats until I find one that will work. Game of Spider, followed by a 30 minute false start with a bronze doormat with filigree around the borders, which I ultimately discard because it's actually kind of pretty. Spider. Google. Finally settle on one of those bristly kinds. Type this:

Aggie did not feel welcome. The doormat at her feet looked like it was made from the backsides of

Aggie did not feel welcome. The doormat at her feet looked like it was made from the backsides of feral boars. And instead of "Welcome," "DOBBS" was printed in thick block letters.

Okay for a rough draft, but not quite enough oomph and that last sentence still needs work. Spider. Revise. Rewrite:

Aggie did not feel welcome. She looked from the welcome mat that looked like it was made from the backsides of feral boars to the brass gargoyle doorknocker

Aggie did not feel welcome. She looked from the welcome mat that looked like it was made from the backsides of feral boars to the brass gargoyle doorknocker the leered at her with chilling blank eyes. Not welcome at all.

So, after four hours of working, I have 40 words, which averages out to about 6 minutes per word. And that only includes the time I was "actively" working and not the time spent skimming my writing books for clues on how to write a scene, looking at opening scenes in 8 or 10 novels on my book shelf, and the other 40 games of Spider that I played while "in deep writerly thought."

And, now that I look at it, if I had had more time, I'd revise it again to:

Aggie did not feel welcome. She looked from the welcome mat made from the backside of a feral boar to the brass gargoyle doorknocker leering at her with chilling blank eyes. Not welcome at all.

See? Now it's down to 35 much crisper words.

And that's the real problem with being a procrastinator. As the deadline approached, I no longer had the luxury of 8 minutes per word. As it was, I wrote for 3 days solid without bathing, and barely breaking for bathroom pit stops and to refill my coffee mug.

I finally uploaded the Seascape Retreat files at 3:30 in the afternoon on Aug 1st. And "finished" and emailed my story for the Christmas anthology at 2:30 in the morning (I know, technically it was Aug 2, but I crossed my fingers that Linda would still accept the submission. And, because she's so gracious, she did!)

The downside, besides nearly killing myself and going blind, is that I didn't get to run any of these past my crit group. The pieces went out into the world raw and wild. While on the one hand, the attendees at Seascape may feel they got their money's worth after slicing and dicing my ms pages, it's embarrassing to know you've sent out work that isn't your best polished words. On the other hand, there's a good chance my story won't make it into the anthology because it needs too much editing. Why would an editor take something that isn't polished when she has stacks of manuscripts that are nearly publishable as they stand?

So, I'd tell you that I will never procrastinate again, but chances are you'll see another blog post just like this one some time in the future. Just ask anyone who knows me.


(PS. I think this one is full, but for future reference, CJ and I are attending the Seascape Writing Retreat in Madison, CT. It's a mystery/crime writers' retreat hosted by authors Roberta Isleib, SW Hubbard, and Hallie Ephron held at a house that was originally owned by Phil Donahue and Marlo Thomas. Cool!. http://robertaisleib.com/seascape.html