A box of tissues, an uplifted heart

cj Sez:  GUIDING EMILY launches today! And Lyrical Pens is happy to host the third in a three-part series by author Barbara Hinske, writing about her research for the novel.

Today's post is about Barbara's need (and maybe yours) for a box of tissues on Graduation Day.

Have you ever wondered about the making of a guide dog?

“From the puppy raiser family of ten who had driven all the way from Texas to California, to the mother and daughter who had surrendered their twenty-fifth puppy, the room was filled with excitement as people waited for their star student to take the stage.

I was the first to arrive and selected a seat in the back. The large room was filled with chairs arranged in a semi-circle around a podium. I wanted to observe the graduates and watch the reactions of the crowd. Attending this ceremony was part of the research for my new book, Guiding Emily.

I had been told that the afternoon would be emotional and been asked if I’d brought tissues. I smiled and said “yes”, but I didn’t think I’d need them. The puppy raiser families would be sad to say a final goodbye to the dog they had spent a year or more loving and socializing. The handlers receiving their new guides would be happy. I wasn’t prepared to witness the bonds of human connection that had been forged or the outpouring of selflessness, generosity, and compassion that defined every interaction.

When called to the podium, one of the veteran puppy raisers told the audience that she was able to perform this life-changing service by reminding herself that she had a puppy to love and not a dog to keep. I sniffled.

Another group told us that they’d been in constant contact with the handler who would be taking their puppy and now considered him part of their large, happy family. With plans made for the guide and handler to join them for Thanksgiving, we learned that these puppy raisers had “adopted” eight other handler/guide couples. They saw each other on a regular basis. I pulled out a tissue and dabbed at my eyes.

Next up was the fifty-something technology giant executive who said that he was looking forward to going into his office with his new guide—that she would encourage people to talk to him and help him make friends at the office.

Had I ever avoided a blind co-worker in another department because I felt awkward and didn’t know what to say?

Had I ever considered how isolated that must have made the co-worker feel?

I removed my glasses and patted away tears on my cheeks.

As the ceremony continued, I stopped observing and became enveloped by the wellspring of joy and love that permeated the room.

I left with a handbag full of soggy tissues and an uplifted heart. 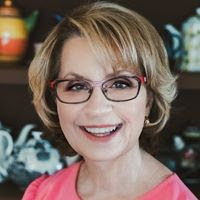 Barbara Hinske is an attorney who recently left the practice of law to pursue her career as a full-time novelist. She is the author of the bestselling Rosemont series and the murder mysteries in her ‘Who’s There?!’ collection. Her novella The Christmas Club was made into a 2019 Hallmark Channel Christmas movie.
She inherited the fiction gene from her father who wrote mysteries when he retired and told her a story every night of her childhood. She and her husband share their own Rosemont with two adorable and spoiled dogs. A true homebody, Barbara is besotted with decorating, entertaining, cooking, and gardening. 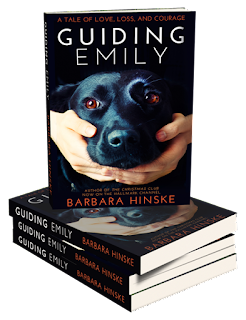 To order your copy of this heart-warming story, click BUY NOW

cj Sez: That’s it for today’s post. You-all guys keep on keeping on, and I’ll try to do the same, (Sending up prayers for your health and safety.)

My love story, “Love is Immortal” is one of the short stories in the paranormal anthology BIENVENUE TO THE CHATEAU ROUGE. Here’s another 5-star review:
Great read
“This is a wonderful array of short stories about an awesome hotel and an incredible staff.
Totally keeps your attention through each story.”