cj Sez: Sending my congratulations and best wishes for success to all the writers who accepted the NaNoWriMo challenge. (See more at their websote here: NaNoWriMo) 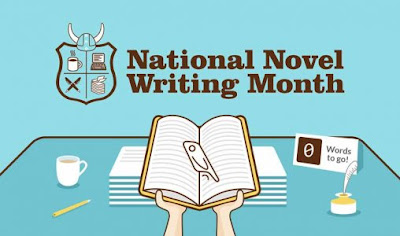 I’m currently working on a novel that now has 40K words….after years (true) of pecking away at it. Obviously, I am not a candidate for the challenge, but I’ve got my fingers crossed that all you writing warriors will carry through to the finish!

You can’t wait for inspiration. You have to go after it with a club. — Jack London

cj Sez: I’ve gone into my archives for the following  post because I think it’s worth repeating for all the new writers entering this publishing world. It may also be helpful for the NaNoWriMo writers when they begin their editing process on December 1.
Having worked as a journalist for a few years, I tend to write my first drafts sparsely—without much narrative. To justify my methodology, I point to Kurt Vonnegut’s eight rules. In this case, specifically No. 4: “Every sentence must do one of two things—reveal character or advance the action.” I know what you’re thinking, and you’re right, rules are made to be broken. However, some are best kept for a while, especially by yet-to-be-bestselling authors, like me.
I also think that I tend to write like a screenwriter (one of the best classes I ever took). I visualize the scene and write to that. By necessity, writers of TV series must think in terms of every scene and every line, because for each hour-long show, they have forty to forty-five minutes to tell the story, beginning to end. (cj Sez: I just checked: the average is forty-two minutes.)
Years ago David Mamet, executive producer of the old action/drama TV series, “The Unit,” had some serious instructions for the show’s writers and sent them a memo that virtually shouted.  (He wrote it in all capital letters, and he had an "inviolable rule.") He directed his writers to concentrate on writing drama if they expected to keep their audience entertained…because if they lost their audience, they’d be out of work. It must’ve worked because the show ran for four seasons. Following are excerpts from that memorable memo:

"QUESTION: WHAT IS DRAMA? DRAMA, AGAIN, IS THE QUEST OF THE HERO TO OVERCOME THOSE THINGS WHICH PREVENT HIM FROM ACHIEVING A SPECIFIC, ACUTE GOAL.
SO: WE, THE WRITERS, MUST ASK OURSELVES OF EVERY SCENE THESE THREE QUESTIONS.
1) WHO WANTS WHAT?
2) WHAT HAPPENS IF HER DON’T GET IT?
3) WHY NOW?
THE ANSWERS TO THESE QUESTIONS ARE LITMUS PAPER. APPLY THEM, AND THEIR ANSWER WILL TELL YOU IF THE SCENE IS DRAMATIC OR NOT.

[ *** ]
START, EVERY TIME, WITH THIS INVIOLABLE RULE: THE SCENE MUST BE DRAMATIC. IT MUST START BECAUSE THE HERO HAS A PROBLEM, AND IT MUST CULMINATE WITH THE HERO FINDING HIM OR HERSELF EITHER THWARTED OR EDUCATED THAT ANOTHER WAY EXISTS. (cj: I think of his inviolable rule as the writer’s hooks at the beginning and ending of scenes and chapters.)
LOOK AT YOUR LOG LINES. ANY LOGLINE READING “BOB AND SUE DISCUSS…” IS NOT DESCRIBING A DRAMATIC SCENE." (cj: They write loglines for every scene.)
cj Note:
A logline is a 25-word synopsis of your book.
A tagline is a catchy “movie poster” phrase.
Examples for Jaws –
Logline – After a series of grisly shark attacks, a sheriff struggles to protect his small beach community against the bloodthirsty monster, in spite of the greedy chamber of commerce. (from J. Gideon Sarentinos  http://bit.ly/1D90FmH  (25 words not counting "a" or "the".)
Tagline – Don’t go in the water.
You can read David Mamet’s entire memo at:
http://movieline.com/2010/03/23/david-mamets-memo-to-the-writers-of-the-unit/
Okay, let me know if what you think. Agree?  Disagree? Helpful with what you’re working on? 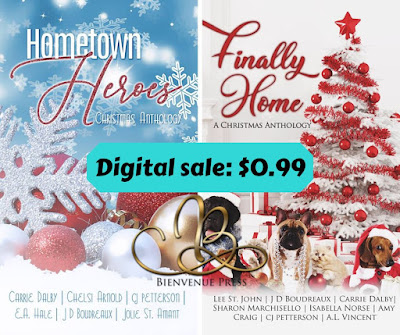 Tis ALMOST the season, but spreading cheer is always a good thing—especially when it’s a two-fer, and you’re actually helping out a charity, too.
The first two Bienvenue Press Christmas charity anthologies are on sale digitally for the entire month of November. Take advantage of the sale prices to stock your E-reader for December and beyond.
HOMETOWN HEROES benefits the Cajun Navy Relief & Rescue
FINALLY HOME helps regional animal rescue programs

Both are available on Amazon (free on Kindle Unlimited)
////
Halloween might be over, but the short pieces (stories, poems, even a play) in HALLOWEEN PIECES are timeless. Add this anthology to your Christmas gift-giving list.
(P.S. Several of the authors have signed a limited supply of copies available from The Haunted Bookshop (see where to order below).
////
Thank you for visiting Lyrical Pens. You-all guys keep on keeping on, and I’ll try to do the same.
cj
P.S.  TO ORDER my autographed books or any book of your choice on-line from one of my favorite indie bookstores, contact The Haunted Bookshop here: https://www.thehauntedbookshopmobile.com/contact-us
The store has re-opened to limited hours, so if you’re in the Mobile area, you can stop and shop, too.
➜ Follow me . . .
➜ on Amazon:    Amazon Central Author Page = https://amzn.to/2v6SrAj
➜ on Facebook:  https://www.facebook.com/CjPettersonAuthor
➜ on BookBub:   https://www.bookbub.com/authors/cj-petterson
➜ on Goodreads: https://bit.ly/3fcN3h6
Posted by Lyrical Pens at 4:30 AM