cj Sez: The importance of a vivid and intriguing first sentence has been hammered, again and again, into aspiring writers. And it’s true. That first sentence needs to invite and draw the reader into the story. But then there’s this: 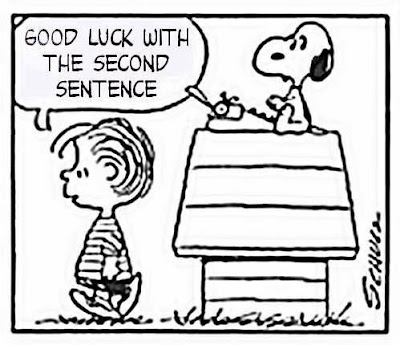 §§
Upcoming awards
And I quote:   “Mystery Writers of America is proud to announce, as we celebrate the 214 th anniversary of the birth of Edgar Allan Poe, the nominees for the 2023 Edgar Allan Poe Awards, honoring the best in mystery fiction, non-fiction and television published or produced in 2022.

“The 77th Annual Edgar® Awards will be celebrated on April 27, 2023, at the New York Marriott Marquis Times Square. The Edgar Awards, or “Edgars,” as they are commonly known, are named after MWA’s patron saint Edgar Allan Poe and are presented to authors of distinguished work in various categories.”
I was excited to see that I actually know some of the awesome writers. To find out if your favorite author is among the nominees and/or how many of the books you’ve read, click here: https://mysterywriters.org/mwa-announces-2023-edgar-award-nominations/
And when you look up the books, pay attention to the cover designs as well, especially you indie published or soon-to-be-published authors. Lots of cues there.
§§
Mardi Gras Season is happening now in Mobile, AL. The first parade rolled through Dauphin Island on January 21. Yeah, I know. Mardi Gras, the day aka Fat Tuesday or Shrove Tuesday, is a month away—February 21. But hey, why wait a whole month to eat King Cake and party? Valentine’s Day, all sweetness and romance, is next on the list of February celebrations.
Here are a couple of Mobile Writers Guild anthologies, chock full of a variety of short stories about those two popular holidays. And the Ebooks are sale-priced, too! 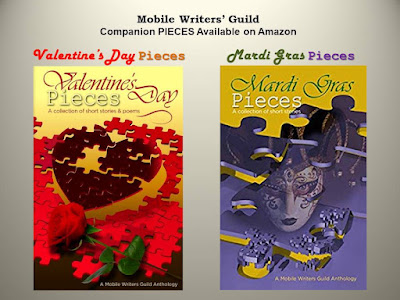 Buy Mardi Gras Pieces
Buy Valentine’s Day Pieces
§§
That’s it for today’s post. You-all guys keep on keeping on, and I’ll try to do the same. Raising prayers for your health and safety.
cj

No inflation here: THE DAWGSTAR and DEATH ON THE YAMPA, my fast-paced, exciting suspense/thriller ebooks, are low-, low-priced at $2.99.
P.S.  The Haunted Book Shop has signed copies of my books in stock. TO ORDER, contact The Haunted Bookshop here: https://www.thehauntedbookshopmobile.com/contact-us
➜ Follow me on . . .
➜ Amazon:    Amazon Central Author Page
➜ Facebook:  https://www.facebook.com/CjPettersonAuthor
➜ BookBub:   https://www.bookbub.com/authors/cj-petterson
➜ Goodreads: https://bit.ly/3fcN3h6
Posted by Lyrical Pens at 4:00 AM